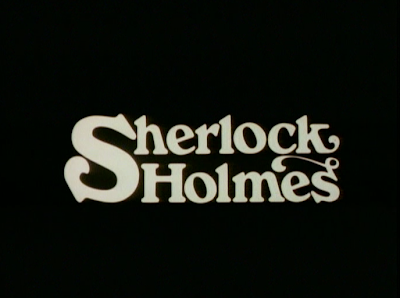 Hopefully you saw that I recently blogged about the Hammer Films production Cash On Demand starring Peter Cushing.  That essay sparked an additional conversation I had with a group of people about actor Cushing and his diversity of roles.  In that conversation, I brought up this Christmas TV episode of Sherlock Holmes with Cushing in the title role--and I think I blew a few minds.  Many TV fans are familiar with the 1980s TV series The Adventures of Sherlock Holmes starring Jeremy Brett as Holmes.  I wrote about the 1984 Christmas episode "The Blue Carbuncle" last year.  So I thought I'd share my thought on the 1968 Christmas episode "The Blue Carbuncle" from this earlier British-made series as well.  Which actor plays your favorite version of Sherlock Holmes? 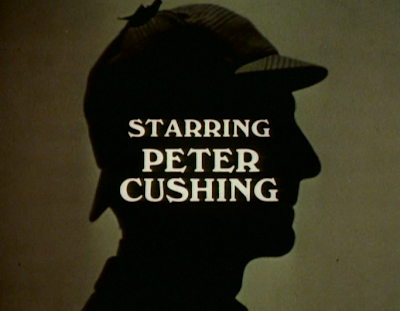 The Christmas tale "The Blue Carbuncle" is adapted from an original story penned by Sir Arthur Conan Doyle, first published in 1892.  The title refers to a stolen blue gem that is owned by Lady Morcar, an upper-class woman living in a London hotel.


The obvious thief is a workman who had access to Morcar's hotel room--a man with a criminal past.  The great detective refuses to take on Mrs. Morcar’s case as it doesn’t prove of any interest to Holmes.  Instead, this Christmas, Sherlock is more interested in finding the original owner of a hat and a fresh goose dropped by the victim of a failed robbery on the street.


When Officer Peterson, the police officer who originally found the hat, also discovers the missing precious gem within the carcass of the goose, Holmes sets off to investigate the two cases together.

This 1968 TV version of the ninteenth-century mystery differs slightly from the 1984 TV version.  Some story elements unfold more richly, such as the introduction of the crime and the hotel staff at the beginning, Sherlock’s refusal to accept Lady Morcar’s commission, and Holmes' bet with the poultry dealer Mr. Breckinridge.  Some of the story elements are revealed in an awkward way for contemporary audiences--for example, there’s little explanation as to why Peterson would have kept the goose and cooked it.  I fear few twenty-first century viewers would be aware of the timely need to prepare and cook freshly slaughtered meat without being reminded of it.   However, I think this particular version of "The Blue Carbuncle" is quite strong.


Does the popularity of Jeremy Brett's Holmes eclipse this earlier series and its Christmas episode?  You tell me.  If you've seen both versions--which is your favorite?  Have you read the original story?  How does this TV adaptation differ from the literary version?  Share your comments below.