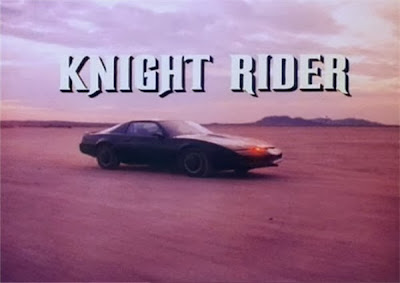 I blogged about the Christmas episode of Knight Rider several years ago.  Since 2013 marks the 30th anniversary of the Christmas episode's release (how is THAT possible?),  I thought I'd expand on the previous essay and add photos.  You know you loved it when it originally aired on television--this is one of those "so bad, it's good" story lines.  How's your memory for this second season episode entitled "Silent Knight?"

Three bank robbers commit a daring heist in broad daylight--and one steals the bank manager's pocketwatch during his escape.  The thieves are able to make a fast getaway but wouldn't ya know it, a gypsy boy picks the pocket of the robber holding the bank manager's gold watch!  The desperate criminals quickly realize that the boy has the only evidence to connect these three men to the bank robbery--and they are trying to track him down.


Trying to escape from the men he's just pick-pocketed, the boy runs into traffic and is hit by Michael Knight driving K.I.T.T.  Though Michael is in a hurry to return to the Foundation's annual Christmas banquet, he offers to drive the injured boy to the hospital.  It turns out Timo, the gypsy boy, is faking his injuries--and Michael becomes savvy to his other lies and schemes, learning that the boy was being chased because he stole a pocket watch.  Listening to the radio news broadcast, Michael quickly puts all the pieces together:  the men are bank robbers and they are after Timo--the only person who can identify them!  (We're only 12 minutes into the episode at this point!).


Though the police offer no protection for Timo, Michael feels obligated to help him.  Michael takes the boy to his older sister who runs a florist shop but Timo refuses to stay with her.  From the sister, Michael learns of Timo's Uncle Stefano, an itinerant King of the Gypsies, who has set up camp out of town.  Sure enough, the bad guys are following Michael, Timo, and K.I.T.T. to the gypsy caravan.


After Michael drops Timo off at the gypsy caravan, he begins to regret his decision.  Perhaps he was asking too much from the family to protect Timo from the dangerous criminals?  When Michael returns to the site of the caravan, they have pulled up stakes and disappeared!  No worries: K.I.T.T. will use his chemical analysis skills to follow the dripping oil stains from one of the campers in the caravan.


When Michael catches up to the caravan, he discovers that Uncle Stefano has already sold his nephew to the three bank robbers--so Timo's not even there.  Meanwhile, the three criminals hear on the radio news broadcast that the bank manager's pockwatch has been in police custody all day.  Timo has already given them up to the authorities--so they might as well kill him.  Fearing for his life, Timo jumps from their vehicle and runs into a corn field.


Luckily, K.I.T.T. and Michael drive into that same corn field and are able to block the farm machinery that may have run over young Timo.  The three bank robbers are caught and Timo is returned to his sister, who he is now willing to live with.  Michael coaxes a promise from Timo to learn how to read (were there scenes cut from the script?).  Finally, Michael heads off into the sunset, on his way to the Foundation's formal Christmas party.  K.I.T.T. offers a Christmas gift to Michael--a wrapped box containing argyle socks--he's supposed to give to Devon.  The joke is that Michael is relieved that the socks aren't for him--he hates getting argyle socks for Christmas.  But I think the joke is on viewers--why are we watching a TV show about a talking car that gives thoughtful Christmas gifts anyway?


No joke, this show is entertaining whether you love it for what it is--or for being so bad, it's good.  One glaring problem I have with this episode reflects its advanced age.  This episode's story depends upon horrible stereotypes of gypsies.   Except the beautiful sister, the gypsies (today we would usually refer to them as Romani) are characterized as scheming con-men, thieves, liars, untrustworthy, illiterate, disloyal, and willing to sell each other out!  It's an uncomfortable stereotype--one that makes this thirty year-old Christmas episode a little awkward as well as culturally insensitive. But the 1980s were a different time.


In addition to the above 1980s visual references, you can also hear several 1980s songs.  At the beginning of the story, in the background you can hear a rocking cover of Yes' hit song "Owner of a Lonely Heart."  Later in the episode, there is a cover version of Fleetwood Mac's song "Gypsy" and a cover of Survivor's "Eye of the Tiger."  Like it or not, this episode is a slice of 1980s mindless fun.