Animation Celebration: The Small One

Today's essay is from Linda Young.  She helps to maintain a website Flying Dreams.org that includes a Happy Holidays/Christmas page, a blog of her daily musings, and more.  Today she shares with us a wonderfully nostalgic piece on Disney's short film The Small One. 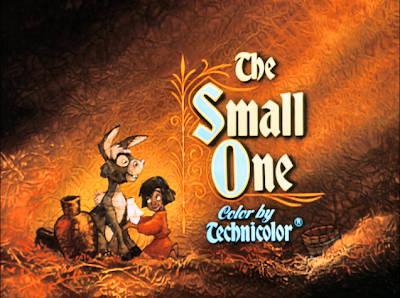 The Small One and I go way back. Really way back, to a time when speeds were slower and cars were heavier, and the best place to be on the traditional “Sunday drive” was sitting between Dad and Mom on the broad front seat of a ‘50's Pontiac, snuggled against Mom while we listened to the last vestiges of old-time radio: NBC’s Monitor, the original Gunsmoke, and those others struggling against television’s relentless tide.

Except at Christmas. Those late December Sundays and few days before Christmas were still reserved for Christmas stories, and for many years after radio had abandoned itself to all-music/all-news formats, one radio station in town still played those well-loved stories on Christmas Eve and Christmas Day, and it was those broadcasts I remember, especially the tale of a boy and his elderly donkey, Small One, retold year after year by Bing Crosby. 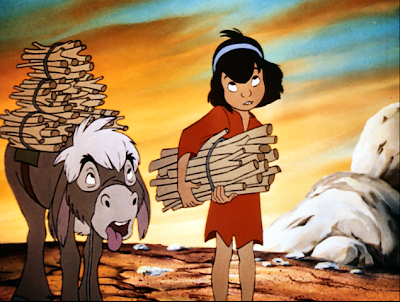 In 1978, Disney brought the story of Small One to film as a half-hour short preceding the re-release of Pinocchio. It was thought an odd choice for Disney, since they usually avoided stories with references to religion, but the story itself was pure Disney: the age-old tale of the friendship between a child and an animal. In The Small One, an unnamed Judean lad has made a pet of one of his father’s work animals, an aged donkey who finds it increasingly difficult to carry loads of firewood. When the impoverished woodcutter finally tells his son that he can no longer afford to keep Small One if he can’t work and will be taking the donkey into town to sell, the grieving boy offers to do the task himself, determined to find his friend a good home. 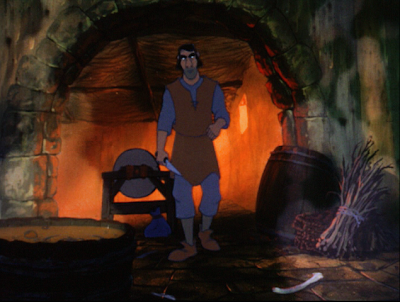 And there, onscreen, was the story I remembered from those Christmas Eves years before: the boy’s relationship with Small One, lovingly detailed in play and teamwork; the heart-stopping moment where the boy realizes that there is only one destiny for his pet; their adventures in town, enlivened by the jaunty but cynical “Merchant’s Song”; the final despair that ends in hope when a man named Joseph chooses Small One to carry his wife to Bethlehem. The story is bookended by Bluth’s plaintive “Small One” song, which still reduces me to puddling goo each time I play the DVD. 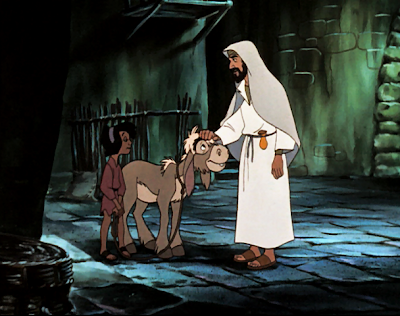 The Small One is a tale of friendship that can be watched in a secular manner as the story of a boy and his pet, or as a story of faith and the first Christmas. But--if I can bear to close my eyes during the lovely animation that long--I can almost, almost turn the clock back to another story, one of spindly pine trees draped with tinsel to fill in the “bald spots,” “big bulb” Christmas lights, baking cookies, Christmas Mass, records dispensing Perry Como and Nat King Cole, visits to Grandpa–but most of all of being warm and happy next to Mom as the hum of the car wheels and the lullaby of The Small One take me off to sleep.