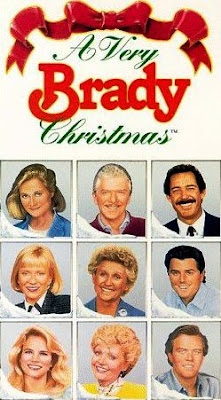 This made-for-TV movie is a schmaltzy afterthought to the 1970s TV show yet still remains a holiday ‘must-see.’ All the original actors in the principle cast revive their roles with one exception: Susan Olsen was unavailable to play Cindy Brady so actress Jennifer Runyon was her substitute. In 1988, viewers loved this return of their favorite TV characters so much, the original series creator, Sherwood Schwartz, generated a whole new series, 1990’s The Bradys to give the now grown bunch another try in prime time.

Here, the adult Brady children are invited to return home for Christmas. But each of the children has a deception he or she is keeping from the other family members. Bobby is afraid to reveal that he quit school to become a race car driver. Peter is hesitant to commit to his girlfriend because she’s his boss at work. Jan’s marriage to Phillip is on the rocks and they are considering separating. Cindy is upset that as the youngest, she’s still treated like a child. Greg misses his wife who is with her parents for the holiday. Marcia’s husband Wally is embarrassed because he lost his job at the toy factory. And, the maid Alice is upset because her husband Sam has left her for a younger woman.

Even Carol and Mike have their troubles. Mike is being pressured by a client to modify the architectural specifications of a building that would be a structural safety risk. But in the middle of Christmas dinner, the building collapses and Mike rushes to the construction site to help. He knows the building’s structure better than anyone and goes inside the wreckage to help free the men trapped inside. Unfortunately, the building collapses more with Mike on the inside! The Bunch gather at the construction site and sing Christmas carols in a united effort of faith and trust that their father and the workers will come out alive.

There are several significant Christmas references here. One is that the family together sings ‘O Come All Ye Faithful’ at the construction site--the same tune sung by Florence Henderson as Carol Brady in the original 1969 Brady Bunch holiday episode "The Voice of Christmas." Another significant reference is the location of this collapsed building, pointed out by the TV news crew covering the devastation. When Mike emerges from the wreckage, it is called ‘The Miracle on 34th Street.’ Of course, this is a nod to the popular 1947 Christmas movie of the same title. 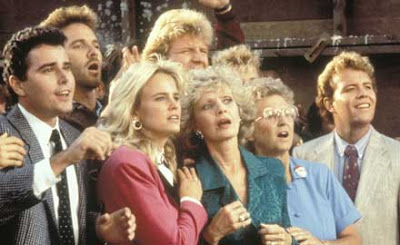 The Bunch wait for a miracle on Christmas Day outside the collapsed building.

This TV movie is both wonderful and awful at the same time. If you have any sentimentality at all for the original series, you'll need to see the cast and the characters now as adults. But this also means the 1970s groovy fashions and youthful innocence are gone and replaced with 1980s big hair, mom jeans, shoulder pads and incredulous adult innocence. But don't get me wrong--I LOVE THIS! And I know you do too--and that's why it still airs every year on TV despite its age. Below is a preview and the opening credit sequence to this made-for-TV movie from Youtube. Enjoy!

Email ThisBlogThis!Share to TwitterShare to FacebookShare to Pinterest
Labels: The Brady Bunch