This Emmy-award winning episode has several interweaving story lines. Maurice Minnifield receives Korean visitors--a woman accompanied by her middle-aged son, the product of Maurice’s military time spent overseas. This is a son that he didn’t even know existed until now. Dr. Joel Fleischman gets himself his first Christmas tree though he’s conflicted over its meaning to him as a Jew. Pilot Maggie O'Connell is desperate to avoid going home for the holidays but is hurt when her family goes to the Caribbean without her. Barmaid Shelly is nostalgic for the Catholic traditions of Christmas from her childhood which Holling tries to satisfy by beautifully singing “Ave Maria.” 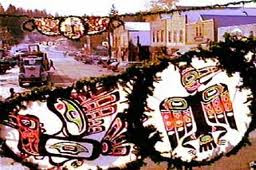 Raven decorations adorn the city of Cicely for the holiday

But the most unique aspect of this episode is the Native-American traditions of Cicely, Alaska: the Raven pageant and folklore explored throughout the story. The city decorates with black bird decorations, ornaments and lights. Don’t miss Joel’s enigmatic secretary, Marilyn, in the lead role of the pageant. Here at the pageant, we see the local mythology of the raven which metaphorically resembles the familiar Nativity story with an emphasis on the themes of birth and light. Exploring this creepy bird’s connection to Christmas further, listen for Chris in the Morning’s radio show exposition and Edgar Allen Poe-inspired commentary. 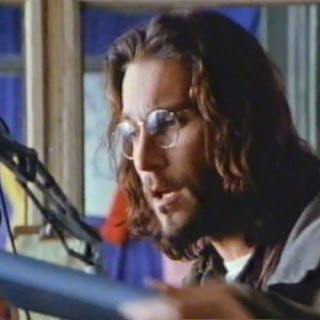 This 1991 episode, written by Andrew Schneider and Diane Frolov, won an Emmy Award for Outstanding Individual Achievement in Writing in a Drama Series for that year. It is available for viewing on DVD: Season 3, disc 3 (or disc 2, side A--for the double-sided DVD release).

Actor John Cullum who plays Holling Vincoeur reveals in this episode his impressive vocal training, Broadway experience and Tony Award-winning talents in his performance of the song "Ave Maria." If you're a reader like I am, you may appreciate seeing Cullum in another literary-themed Christmas episode: "It Came Upon a Midnight Clear" on the TV series Touched By An Angel. Cullum plays Mark Twain in a touching holiday story. This 1997 episode not only dramatizes the life of American writer, Mark Twain, but includes references to the poet Henry Wadsworth Longfellow and his hope-filled poem/carol “Christmas Bells.” 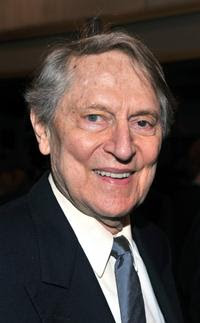 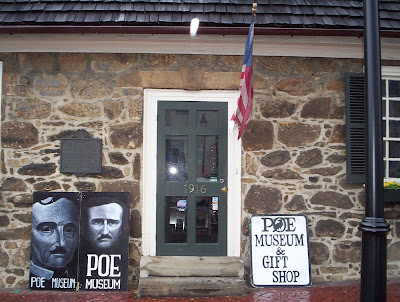 Poe Museum in Richmond, VA--pardon the photo, I was standing in the rain!

I was inspired to once again reflect upon this spectacular Christmas episode because today I spent the day at the Poe Museum located in Richmond, Virginia. As you know, I'm on book tour right now. I arrived in Richmond a few days early so I'm enjoying the local attractions. My first stop had to be the Poe Museum--and this weekend when my book tour takes me to Baltimore, I'm going to visit Poe's grave.

I'll be signing books at Chop Suey Books on Thursday, November 18th from 4-6pm. See you there! 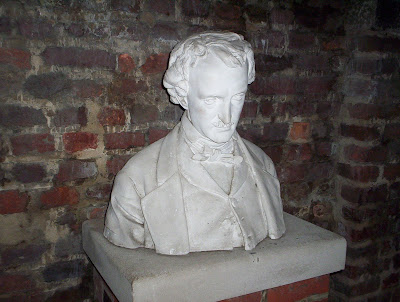 Gorgeous Poe bust in the Memorial Gardens at the Poe Museum
Posted by Joanna at 7:17 PM