Today's essay is the last original essay--tomorrow I'll post a recap of the month's guest posts so you'll be able to see if you missed any of them.  Thanks to everyone who participated--I hope you got as much out of it as I did.  Isn't it fun to see what animated holiday stories are important to others?

Today's essay is on 1973's A Very Merry Cricket.  How long has it been since you've re-watched this one?  This guest post comes to us from Dominic, the editor/publisher of 1701 Press, who also wrote the essay on his favorite Simpsons Christmas episode earlier this month. 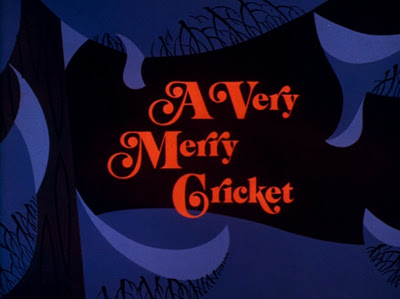 A Very Merry Cricket is the sequel to the 1973 animated short, A Cricket in Times Square. Chuck Jones--the animator behind the Christmas TV classic, How the Grinch Stole Christmas--adapted A Cricket in Times Square for television from George Selden’s story and Garth Williams’ illustrations. It’s the story of Chester C. Cricket, a Connecticut cricket, who, through a series of mishaps, finds himself in New York City. He’s taken in as a pet by a boy in a subway newsstand, and befriended by a stray cat, Harry, and his best friend, Tucker the mouse. Chester saves the newsstand’s sagging business when it’s discovered that he has an incredible musical gift and all of New York is captivated by his ability to play beautiful music.


In A Very Merry Cricket, Chuck Jones reunites Chester with Tucker and Harry to rekindle the spirit of Christmas in New York. The city has become a nightmarish place--rife with chaos, commercialism, and selfishness. Harry and Tucker decide to bring Chester back from Connecticut to the city for Christmas, believing that his music will inspire the city dwellers to be kinder--like his music did the first time Chester played for them.


So, the cat and mouse make the trip to Connecticut to enlist the help of their friend. The trip back to New York proves somewhat tricky, with the trio having to improvise to avoid an aggressive bulldog and a threadbare stray cat who wants to make Tucker the main course in his Christmas dinner. When they return to New York, they find it too loud and chaotic for anyone to hear Chester’s music. In a stroke of Christmas luck, a power overload causes a blackout and Chester’s beautiful playing miraculously brings out the best in everyone again.


A Very Merry Cricket is every bit as charming as A Cricket in Times Square, and it’s filled with Chuck Jones’ unforgettable style. I grew up loving How the Grinch Stole Christmas, and A Very Merry Cricket could have easily been a favorite companion piece to The Grinch. Watching A Very Merry Cricket again, I was struck with how excellent it is. It’s got wonderful characters. Tucker the mouse is voiced with great warmth and humor by Mel Blanc (who brought so many classic Warner Brothers characters to life, from Bugs Bunny to Foghorn Leghorn), and the suave Harry the cat along with mild-mannered, liverwurst-loving Chester C. Cricket, are voiced by the elegant Les Tremayne. Both Tucker and Harry display Chuck Jones’ signature style of facial expressions and movement--looking like they could’ve have been good friends to the Grinch and Max the Reindog. The imposing city scenes of hustle and bustle, and the eventual scenes of goodwill and togetherness are absolutely spectacular. There’s little movement in many of these city scenes beyond that of the camera panning from one direction to another, but it’s done with such artistry that the feelings come across loud and clear.


The music is also wonderful.  Music, of course, is a big part of my Christmas celebration. It also plays an important role in my cherished Christmas memories growing up, watching Christmas on TV, celebrating with my family and Italian grandparents, and going to church with all the old Italian people in an atmosphere that was both reverent and joyful. A Very Merry Cricket is filled with lovely violin arrangements of Christmas carols, including “Silent Night” and “Joy to the World.” When Chester plays “It Came Upon a Midnight Clear,” the arrangement swells to include a particularly beautiful vocal accompaniment by a solo child’s voice, backed by a choral group.


The characters are charming, and the story conveys a satisfying sense of Christmas spirit. But my favorite part of A Very Merry Cricket is the montage of scenes of togetherness, goodwill, and happiness as people all over the city are inspired by Chester’s beautiful Christmas music. The illustrations are beautiful, filled with humanity, and they make this animated special a real sight to behold.