A Very Harold and Kumar 3D Christmas by Bob Ignizio 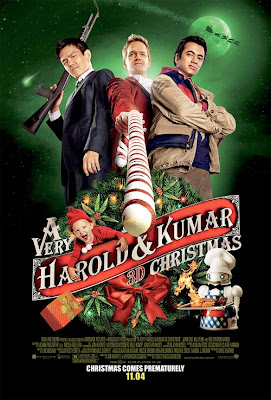 The editor of Cleveland Movie Blog, Bob Ignizio, is a good friend to this blog.  He not only comments frequently but guest blogged during our Christmas in July celebration about the Christmas scene in the 1997 movie Boogie Nights.   Click here to see that again.  He and I were invited to participate in a panel discussion of blogging and podcasting at the Akron Film + Pixel Festival this past October.  On Friday, he wrote a review of the new Christmas movie released into theaters, A Very Harold and Kumar 3D Christmas.  Bob was gracious to share it with us today.  Thanks Bob!  Please feel free to check out Cleveland Movie Blog for the latest movie reviews of independent films and popular movie reviews each week.

A VERY HAROLD AND KUMAR 3D CHRISTMAS is the third film to star John Cho and Kal Penn as the titular comedic stoner duo. Series creators/writers Jon Hurwitz and Hayden Schlossburg are back again as well, and while they aren't quite scraping the bowl for resin just yet, they're definitely getting near the bottom of the bag. Which is not to say their product won't get the job done if you're a fan; the guys deliver a fair number of laughs here, even a few big ones, but nowhere near as many or as big as in the first two movies. If you haven't thought much of the series prior to this, or you have a general aversion to movies in which most of the humor derives from the characters consuming copious amounts of narcotics (including in this case a toddler), this won't be much of a holiday treat.

Harold and Kumar, once the best of friends, haven't seen each other in years. Harold is now a successful businessman married to Maria (Paula Garcés), but he still hasn't won over his wife's father Mr. Perez (Danny Trejo). Kumar, on the other hand, failed a drug test at work and is still living the life of an aimless stoner, which is beginning to look kind of sad. Of course the movie contrives a reason for the two to get back together (a package for Harold shows up at Kumar's apartment) and a quest for them to go on (they need to get just the right Christmas tree to impress Mr. Perez). And at some point Neil Patrick Harris is going to show up to play himself as a womanizing scumbag (who poses as gay as a way to pick up girls) whose drug habits make Harold and Kumar look like teetotalers.

As the title implies, A VERY HAROLD AND KUMAR 3D CHRISTMAS is indeed in 3D, and it actually makes good use of the process. Director Todd Strauss-Schulson isn't ashamed to use 3D as the gimmick it is, and he executes some effective gags with the technique. Not sure if those scenes will play as well when seen flat, so this is a rare case where I'm recommending you fork over the extra couple of bucks for the glasses if you're going to see the movie.

I don't really know if most fans of this series care or not, but the first two films had more heart and even a little more substance to them than this one. There's some attempt to deal with the notion that maybe Kumar could be a little more mature and responsible, and maybe Harold needs to grow a pair, but basically the movie is about drug jokes, dick jokes, ethnic jokes and religious jokes, all with an irreverent (but not mean) sensibility. And really, does a movie like this need to be anything more than that? I mean sure, it can, but no, it doesn't need to be. It's not as if all the Cheech and Chong or Abbot and Costello or even The Marx Brothers movies were 4-star comedy classics, but plenty of people still get a kick out of watching even the lesser film in their respective oeuvres.  And I imagine plenty of people will get a kick out of watching Harold and Kumar have a green Christmas, even if it isn't quite as much fun as watching them look for a Whitecastle. 2 1/2 out of 4 stars.
Posted by Joanna at 12:27 PM