Christmas TV Party 2015: Joseph Moore at Christmas Wishes Book
1) What Christmas program/movie have you seen more times than any other?
That would be a tie between the 1951 version of A Christmas Carol and Charlie Brown's Christmas. I remember seeing the premier of the latter when I was 5 years old, my mother reminded me all day and it really built up the excitement. I was not disappointed. 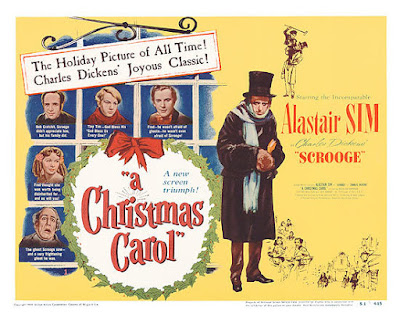 2) What is your favorite musical Christmas TV special, variety performance, or holiday song in a movie?
Too many favorites to choose, so I will go with what I feel is the most underrated: the song "One More Sleep Till Christmas" from the movie The Muppet Christmas Carol. This Paul Williams tune really should have become a standard by now.

3) What's your favorite TV or movie adaptation of Dickens' A Christmas Carol?
I am a connoisseur of all versions of A Christmas Carol, and the best movie version (IMHO) is still the 1951 version. The most underrated movie version is the 1935 Seymour Hicks adaptation, which reveals more of the story's 'ghost story' origins. The TV Movie retelling that I love best is Karrol's Christmas, which I think was originally an A&E production, but now sometimes pops up on the Hallmark Channel. The various Radio Play versions should all be checked out wherever they can be located.

4) What do you think is the worst Christmas program/movie--or your least favorite, the most disappointing or most overrated?
I absolutely HATE Bad Santa. I'm not generally against films, books, or TV programs that make fun of the Holiday Season, but that movie was just mean-spirited to such a degree that it contained zero redeeming value.

5) If you were asked to give advice to a TV network executive in charge of holiday programming, what would you suggest?
Please, please, PLEASE! stop using up all of the Christmas-oriented programming by the second week of December. Try placing those movies, specials, and other related programs during the 7 days before December 25th. Load Christmas Eve up with as much Holiday-themed fare as possible, a la the fictional network in Scrooged in the hope and belief that families will want to be together sitting around the TV, trimming the tree and wrapping gifts and enjoying watching good, so-called "old fashioned" entertainment, whether it be movies like White Christmas, reruns of old sitcom Christmas episodes, old variety shows, or better yet new variety shows inspired by the old ones.