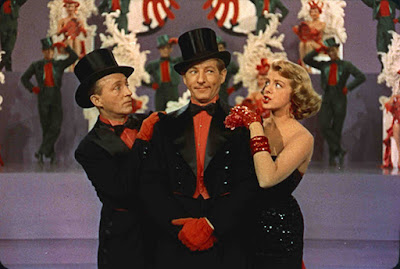 Christmas TV Party 2015:  Humanbelly
1) What Christmas program/movie have you seen more times than any other?

Ha!  Well, it's not a great one by any stretch-- but it's going to win by default simply because it does end up getting viewed every single year (or is at least on in the background):  WHITE CHRISTMAS w/ Bing Crosby & Danny Kaye.  Before we had kids, my wife and I may have watched it a time or two on our own. Then, with the advent of a young family, late-night on Christmas Eve became, of course, the time that lots of presents were wrapped and MUCH of our particular brand of Christmas Morning preparations took place.  So-- what movie to have playing that could be fairly entertaining and yet didn't require quiet, attentive viewing?  Like, if you missed a half-hour it didn't matter a lick?  Yep, WHITE CHRISTMAS.  It's pretty long, it's visually attractive, has a ton of camp and schtick, has entertaining merits of its own, and yet is an erstwhile and strong candidate for the MST3K treatment-- noooooo question.  And here's the thing--in the last couple of years I have come across two different college-age folks who've told me that it's also their family's late-night Christmas present wrapping movie as well--!  Who'd've ever thought, eh?  Anyone else out there?  Could this be a wholly undocumented common phenomenon?

2) What is your favorite musical Christmas TV special, variety performance, or holiday song in a movie?
Ohhh, it's gotta be the David Bowie/Bing Crosby Little Drummer Boy duet in Bing's last Christmas special.  But honestly, I knew that as a recording before I ever saw the clip.  A close runner-up would be the Winter Warlock/Kris Kringle's Put One Foot in Front of the Other in SANTA CLAUS IS COMIN' TO TOWN.  The lovely boys choir version of Little Drummer Boy in the special of the same name is also lovely and haunting.
3) What's your favorite TV or movie adaptation of Dickens' A Christmas Carol?
No question-- 1951, w/ Alistair Sim.  He's one of the very, very few actors that convincingly pulls off the unfettered joy of the transformed Scrooge. I've done the role myself a couple of times, and pulled much inspiration from the choices in his portrayal. I do think the Albert Finney musical did a much better job of capturing both the melancholy AND the terrifying aspects of the story- and Finney's a tremendous actor-  but the ultimate success relies on that convincing transformation--- and Sim nailed it.  Peerless.

4) What do you think is the worst Christmas program/movie--or your least favorite, the most disappointing or most overrated?
The aforementioned LITTLE DRUMMER BOY (Rankin/Bass).  That stop-motion animation simply can't be rushed to make a quick buck--but that's surely what they tried to do.  Its tone is FAAAAAR too dark and painful, there's no true plot, the animation is so sloppy and choppy, and-- god knows I love Paul Frees, but he does EVERY SINGLE VOICE except for the two main characters.  It's absurdly obvious-- especially because his voice tends to have a distinctive sound regardless of character effect he's going for.
Y'know, the Star Wars Christmas Special gets a lot of grief, but---I've never seen it.  I mean, has anybody??  Heck, is there a pirated version of any sort out there, even? Also, I couldn't stick with that SANTA AND PETE thing awhile back, even though it had kind of a neat deep-history basis, and wasn't just a silly, wild fabrication.
5) If you were asked to give advice to a TV network executive in charge of holiday programming, what would you suggest?
Hmm-- how 'bout as a "gift" to the viewers, trim at least one commercial break out of each half-hour? Let us have at least 24+ minutes of content per 30? Create the potential for the program to have a bit more depth, then, to indeed make it special?

Also, for the luva Krampus, never EVER have any special or episode end with a big holiday party and everyone dancing exuberantly to "Jingle Bell Rock." Stuff like that makes me consider boycotting any of the sponser's products.