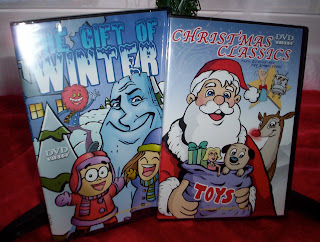 Now for a little fun. I'd like to hear from you:

My publisher has kindly offered to read all the submissions and pick the winner. We'll post the responses as we get them and the winner will be announced at NOON on Wednesday, December 16th. Send your entries to: Dominic@1701Press.com. You may enter more than once. The winner will get two brand new DVDs I recently found which contain rare Christmas animated TV specials I've never seen on DVD until now.

Disc 1: "Christmas Classics" includes the following:
--George and the Christmas Star--an animated, 30 minute special from 1985, written and directed by Gerald Potterton with music by Paul Anka. It's included in the book in the sci-fi chapter on pg. 46-47.
--Paramount's Famous Studios Screen Song from 1949, the cartoon Snow Foolin' where viewers sing along with the bouncing ball to the song "Jingle Bells."
--A 1947 Little Audrey cartoon from Famous Studios Noveltoons entitled Santa's Surprise.
--A 1948 Famous Studios cartoon Hector's Hectic Life.
--the Fleischer cartoon for Jam Handy, entitled Rudolph the Red-Nosed Reindeer.
--1936's Fleischer classic, Christmas Comes But Once a Year featuring the character Grampy--who was first introduced in a Betty Boop cartoon. This animated short is also within Pee-Wee's Playhouse Christmas Special and is presented by the King of Cartoons. See page 64-65 for my discussion of the special and the cartoon.

Disc 2: "The Gift of Winter" includes the following:
--1974's The Gift of Winter which features the voice cast of actors Gilda Radner and Dan Ackroyd. This 30 minute animated special by animators Leach and Rankin has very unusal looking image design. It is discussed on pg. 97-98 in the book. This is the same creative team that produced the equally charming, Halloween special The Witch's Night Out.
--Paramount's Famous Studios Screen Song from 1948, the cartoon Winter Draws On where viewers sing along with the bouncing ball to the song "Alabamy Bound."
--Fleischer animation from 1946 entitled Hawaiian Birds.
--Another Fleischer cartoon Peeping Penguins from 1938.
--a repeat from disc 1 of Snow Foolin'.
--a 10 minute animated short from 1982 entitled Gifts of the North Wind, a Norweign fairy tale of sorts. I'm unfamiliar with this cartoon but a young viking confronts the North Wind and receives three gifts: a magic tablecloth, a magic sheep and a magic stick in order to surive the brutal winter weather. It appears dubbed into English and it bears the familiar character design that is produced for anime. Very intriguing.

These cheaply produced DVDs contain some rare animation and so I'm hoping you will appreciate the sacrifice in quality for accessibility. These are not bootlegs but DVDs I bought at the local grocery store. Good luck--I can't wait to hear from you.
Posted by Joanna at 1:19 PM

Email ThisBlogThis!Share to TwitterShare to FacebookShare to Pinterest
Labels: contest, George and the Christmas Star, The Gift of Winter