Wow. I actually don't remember any SNL Christmastide sketches at all. I don't watch the recent shows because they are too political, and I don't recall any classic ones. I seem to vaguely recall seeing a SNL sketch with Hugh Laurie when House was on the air, but I didn't like it that much.

My favorite Christmas sketch from a comedy LIKE SNL is "Raging Rudolph" from MAD TV. It's amazingly gross, but at the same time having the juxtaposition of the Rankin-Bass characters in a Godfather-setting is well done and very funny in a grim way.

That's a hard one to choose, because I just watch them indiscriminately based on how I feel, The Homecoming one night, The Voyagers! Christmas episode and The Waltons "Best Christmas" the next. So I'd say the whole beautiful bunch of them. It's wonderful to revisit with the unique characters like Addie, the Thornton family, Susan Walker, etc., but also nice to see your favorite series characters in a Christmas setting. 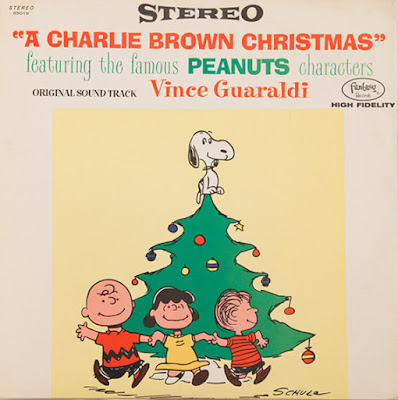 Oh, my gosh, what a hard question. I would have to say A Charlie Brown Christmas, because the jazz soundtrack is unique to specials of the time, and even the incidental music (like the piece of music that's playing when the kids are catching snowflakes on their tongues) is memorable.  "Christmastime is Here" is probably one of the most beautiful Christmas songs to come out of the 1960s. But I could say the same of Rudolph the Red-Nosed Reindeer and especially Mr. Magoo's Christmas Carol, the latter whose songs I could sing by heart even after the network dropped showing it for years and years and it wasn't until I got cable in the 1980s that I got to see it again. Magoo is also a production where the incidental music is just as memorable as the songs, like the piece that plays when Scrooge comes back to the town where he went to school, after he says "I could walk it blindfolded!"

Any that you haven't reviewed before.  And will you ever be reviewing The March Girls at Christmas, which some people hated, but I enjoyed (except for the fact that half the male characters were "eh..." especially their take on John Brooke).

I think I have commented on this before, but really, it's the part I hate. From Thanksgiving Day (and sometimes before) onward, we are bombarded by Christmas specials and Christmas episodes, and then WHAM, about three or four days before the holiday itself, except for the movies on the non-network channels, Christmas just VANISHES and we get reruns. (Thank goodness for PBS, which still shows Christmas concerts on Christmas Eve.) Through the 70s you would get new Christmas specials, or even reruns of Christmas specials, on Christmas Eve and Christmas Day, and there would be new episodes of shows on Christmas Day back in the 1950s and 1960s for sure. The British still do this (although often what they call a "Christmas episode" has very little to do with Christmas), and I love reading "The Radio Times" and "The TV Times" for Christmas week to see what the BBC and ITV are showing. Thankfully we have DVDs to fill in this gap, but it's really very lazy of the networks. And then, the minute Christmas Day bongs its finally bong at midnight--Christmas is GONE. The Christmas season lasts until January 6--the Twelve Days of Christmas. Instead we are stuck with more reruns, while the stores are already putting out Valentines Day decorations before we even count down to New Year's. If we're lucky, someone will rerun Happy New Year, Charlie Brown, but they'll usually do it before Christmas!