(Not sure this is the sketch John references--and Raging Rudolph is from MadTV--but we can discuss it further in the comments. )

There are so many to pick from! But I think my favorite has to be the one where they recreated Rankin/Bass' Rudolph special - and they copied the characters and the stop-motion animation perfectly - but they gave it a dark spin, with a little bit of South Park thrown in there as well!

I'd say all of it. As far as Christmas episodes go, they are usually my favorite episodes of  TV series anyway. Among more recent series, I especially love the ones from the Big Bang Theory, Last Man Standing, The Goldbergs and the BBC Comedy show Mrs. Brown's Boys. 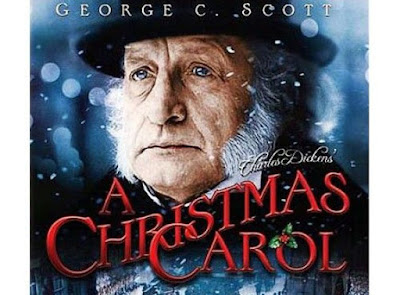 For me, it's Nick Bicat's score from the 1984 version of "A Christmas Carol," with George C. Scott. Wonderful soundtrack, but was never released. I emailed Nick Bicat once and said the score was really good and asked him if he was ever going to release it. He said he gets that all the time and he was working on it. A few years later I emailed him again and asked him whatever happened to the score, and in return he asked for my mailing address. A couple of weeks later I received a CD-R in the mail from London. The score was never released at the time. He just made a copy for me and sent it to me, and because of that it's one of my most treasured Christmas CD's.
(The score did see a limited release years later though.)

That's a tough one, I'm not sure I remember all of the reviews and what has already been covered, but I certainly enjoy all the ones I read on there!

Something I noticed with a lot of Christmas special reruns, especially on the 25 Days of Christmas schedule, is how much they edit the shows to make more room for commercials. Not only that, but they slightly speed them up to make even more room for commercials. You can usually tell because the audio has a slight whooshy sound when sped up. I've noticed that in everything from Rankin/Bass reruns to George C. Scott's Christmas Carol. The editing and the audio are so bad that I can hardly watch them on TV sometimes and just stick to the DVDs instead. I don't mean to say everybody does that, but you can sure tell when they do!