I kind of gave up on SNL when Jane Curtin left so I'm not familiar with the majority of their sketches unless they have went viral.  I have liked the Claymation "Christmas for the Jews" bit they did.  And I don't know if it was SNL or which cast was performing it but I recall seeing a five minute vignette that showed Scrooge after a year.  He was giving away his assets to anyone and everyone with most recipients laughing at him as they made off with his treasure.  He is revisited by one of the ghosts who tells him he's going overboard and to dial it back a little (sounds like a Reagan era skit).  This also could have been the inspiration for the Blackadder Christmas Carol.

Well, my favorite forms of holiday entertainment are music, OTR, and live performances.  But from the selections above I would have to combine two -- specials and animation.  Most Christmas animation that I love (Mr. Magoo's Christmas Carol, A Charlie Brown Christmas, A Garfield Christmas, How Murray Saved Christmas, etc) were specials. 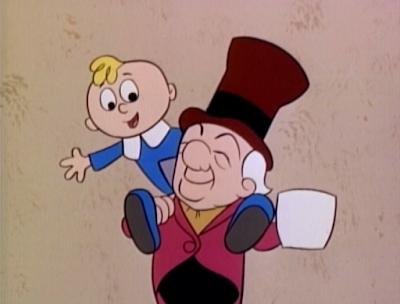 You'll probably get a lot of votes for this one but the best music is from Mr. Magoo's Christmas Carol.  I was so happy when they issued a sheet music book for the special a couple of years ago.  I can do without "Back on Broadway" but other than that all the songs are excellent.

How Murray Saved Christmas.  I watched the initial broadcast and found it quite enjoyable.  Any program that uses the great Billy West can't be bad, can it?  However in succeeding years NBC cut the program from 90 to 60 minutes.  Fortunately I was able to obtain a DVD of the full length cartoon and it is played every year.

The first change is the elimination of the religious element.  Don't like it.

The second is the onslaught of identical plot movies running continuously.  My wife is hooked on the Hallmark Channel Christmas marathon.  I've never understood why because nearly every one I've watched contains the same plot.  A person is fed up with the big city / their life / their family and go to a rural area / small town /vacation site and find the true meaning of Christmas and the love they were always meant to have.  Yuk!

And finally I've noticed a pullback on the use of Jingle Bells in Christmas programs.  From the forties to the seventies it seemed like if a movie or television program needed either background music or opening music they would always go to Jingle Bells (forties' programs also used religious carols).  But in later years it appears that although it is still used way too much it's not being used as much and that's a good thing (sorry, Martha Stewart).