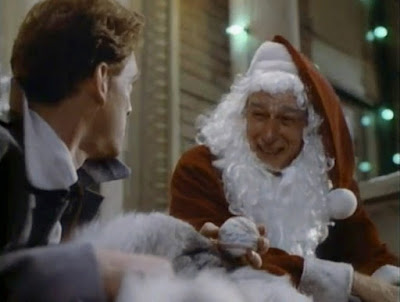 First thought is always Richard Mulligan from the 1985 Twilight Zone remake of "Night of the Meek." I generally hadn’t thought of Santa portrayals as authentic, because they’re usually pretty one dimensional, or just cliché, but I could really relate with Mulligan’s Santa, someone who started the day as someone else entirely, but who eventually accepted that he was in fact Santa Claus. That portrayal is always going to be my favourite.

Honourable mentions to Rosemary Clooney on ER, the M*A*S*H episode with Charles and the orphanage, All in the Family’s "The Draft Dodger," Community’s "Abed’s Uncontrollable Christmas," WKRP’s "Jennifer’s Home For Christmas," and the first Simpson’s episode, but I think I have to give it to The Jefferson’s with George’s old apartment. Classic, sentimental, and funny. Regular repeat viewings around here. Facts of Life's "Christmas in the Big House" (and the other Christmas episodes) also gets a lot of plays come Christmas time.

Oh, and wanting to pick a more obscure one that I love that might not be as well known, Jack Klugman guest-starring on Third Watch’s ‘Run of the Mill’ is another great choice.

And of course the "Night of the Meek" episode mentioned above, but I think I covered that with the last question. All of these get viewed a lot around here.

I do watch some year round, as a practicality to keep up and catch up, and to fuel some of my need to capture images from Christmas shows or movies. Obviously the bulk is in winter, ramping up and setting the signal that Christmas is coming, but it doesn’t end the 25th, specials play regularly into the new year, but it slows for sure after that. Nothing wrong with watching them whenever the mood strikes you, if you enjoy them in December why not any other time? Some like Black Christmas get played whenever, no need to limit to winter.


4) This is the 21st century--how do you watch TV and/or Christmas entertainment?

Methods of consuming in rough order of use: Personal library on AppleTV, new purchases (DVD, download), Local library (DVD), Download, YouTube, Antenna. I don’t generally stream, and I don’t have cable, but I’ve spent 20 years gathering a personal library of Christmas TV content that would cover hundreds out hours of viewing. I like to try to add every year, but if I was never able to again, I’d likely be good for the rest of time. (I always have a ton of Christmas titles in my Amazon cart, so I can know when the price drops. Everyone loves a sale…)

I’m often fortunate to take a trip to Toronto each year around Christmas and I load up and old iPod Touch with obscure Christmas movies and amuse myself on the 5 hour train ride, catching up on lost gems. I keep a number of Christmas movies unwatched just so I can discover them in that time. It’s like putting down a bottle of wine for a time you know you’ll enjoy it ;)

Black Christmas (The original, I don’t acknowledge the remake) because it lends itself to repeat viewing, with new things to discover all the time, Scrooged, because it’s funny, long and always entertaining, and maybe Love Actually, because there’s so many characters and storylines in that it could hold up to regular repeat viewings and still be good. Three very practical answers!

Unless of course the MacGyver Christmas episode has tips for getting off an island. I don’t think it did, but if it did, then definitely that one. :)