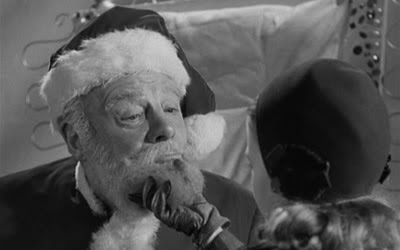 Oh, I think that has to be Edmund Gwenn from Miracle on 34th Street. *I* would certainly believe his Kris Kringle to be Santa Claus. (Confession: I also have a fondness for Mr. Nicholson in Lassie's "Gift of Love.")

This is like asking Olivia Walton to choose which of the seven kids is her favorite. Probably "Merry Gentlemen" from All Creatures Great and Small because it's so old-fashioned. But must toss in for honorable mention all those black and white Timmy and Lassie episodes, The Good Life/Good Neighbors Christmas episode, and "The Best Christmas" from The Waltons. And "Christmas on the Airwaves" from Remember WENN. And the Christmas episodes from an old favorite I don't mention often enough, WSBK-TV38's local show Ask the Manager. This is too hard!!! :-)

I usually just watch Christmas entertainment at Christmas--but for me that goes from Black Friday to January 6 (or maybe even January 13, St. Knut's Day), so there's lots of time to enjoy it all. Sometimes if I'm depressed I will put on something Christmassy, like one of the Lassie episodes.

The majority of my viewing is done on DVD. I recorded a lot of Christmas programs on videotape and transferred them to DVD. Today a lot of what I recorded is now on professional DVD, but I still have the originals I taped, like A Very Merry Cricket and "The Best Christmas" and the Lassie stories. Because, really, how can one celebrate Christmas properly without John Denver and the Muppets, or A Muppet Family Christmas, or watching Joe and Dana/Dan and Dana clown around on the Ask the Manager set? I still have a few pro videotapes, too, like The Raccoons Christmas (with Rupert Holmes and Roberta Flack doing the music) and Perry Como's Christmas in Many Lands. (GetTV repeated several of the Como specials featured on that tape last Christmas. I still have them on the DVR. It was super seeing them again. I love Perry Como. They also had a Carpenters special, an Osmonds and Andy Williams special, the Judy Garland Show Christmas episode, and some Christmas episodes of The Merv Griffin Show.) I've found a few rarities on YouTube and promptly downloaded them, too. I can't really watch Christmas specials on "live television" anymore. The big commercial breaks make the stories too disjointed and I lose all my seasonal feeling when favorite scenes are ripped out for additional commercials. We have Britbox this year, so hoping they come up with something good at Christmas. I would love to see some old British Christmas documentaries, like Christmas Past (my copy is missing 10 minutes), and ones they did about Christmas' pagan roots and also one about Charles Dickens and the "invention" of Christmas. Ditto Acorn TV. Would love to see them pick up some Canadian Christmas programming, including a very weird movie called North Station (Station Nord) that I caught once on Netflix.

As much as I hate to leave Rudolph and Charlie Brown out of the mix, this has to be The Homecoming, The House Without a Christmas Tree, and Mr. Magoo's Christmas Carol. The others I love, but these three live in my heart. (I still want to sneak aboard my Ask the Manager and Lassie episodes, though.)