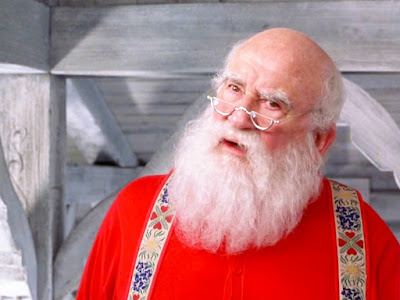 Christmas in July 2017: SleepyKittyPaws of http://sleepykittypaws.tumblr.com/

I'm partial to Ed Asner's Santa, mostly due to Elf, but Asner has played Santa before, and is slated to do so again, for good reason. His gruff but lovable voice and overall demeanor definitely suit the role (pun intended), and Elf's gentle-but-somewhat-cynical Santa gives the Jolly Old Elf a modern spin, without sacrificing Santa's inherent innocence and charm. And perhaps most importantly for a man whose bushy beard hides his features, Asner's deep laugh translates into a true, booming "ho ho ho" that perfectly embodies the cheeky, magical man in red.

I'd also like to award honorable mentions to Edmund Gwenn's classic appearance as Kris Kringle in the original Miracle on 34th Street, who set the Santa standard for generations of moviegoers, and the various charismatic & indelible animated portrayals of the North Pole's most famous resident. From Rudolph's red-cheeked employer, to Prep & Landing's rarely-seen, red-coated head honcho and the Polar Express' winsome Santa-as-Celebrity portrayal, most of our first impressions of Christmas' Big Guy come from stories and specials featuring famous voices, but hand-drawn, or CGI, visages. 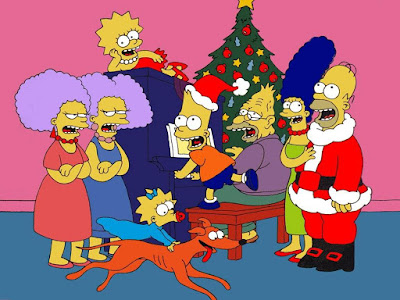 Oh my, so very many to chose from!

The Simpsons have put together half a dozen remarkable holiday episodes, including their pilot outing, "Simpsons Roasting On An Open Fire" (1989).

Last year, Disney Channel put out a special 30-minute episode of its new Mickey Mouse cartoon short series, titled, "Duck the Halls," that is sure to become an annual must-watch in our house, though that treads the line between stand-alone special (since it can definitely be watched that way & is outside its series normal format), and series holiday-centric episode.

As does another animated fav (also from the Disney Channel), "Phineas & Ferb Christmas Vacation," where Santa threatens to skip Danville due to a Doofenshmirtz inator that puts the entire town on the naughty list. This sweet & funny extra-long episode, released as a stand-alone in 2009, is a yearly tradition in our house.

The other, more offbeat choice that came to mind is the holiday episode of the one-season-wonder, Trophy Wife. A more grown-up Christmas laugh, in "'Twas the Night Before Christmas...Or 'Twas It"(2013), the adult members of the extended Trophy Wife family struggle to unravel the mystery of exactly what happened on Christmas Eve after their memories go blank, thanks to some especially potent mulled wine. Unexpected and uproariously funny, this was one of the most clever, and completely unique, sitcom salutes to the holiday I've ever seen.

As a serious Christmas TV & movie junkie I limit myself to indulging only during the holiday season. Granted, I have extended that window to roughly November 1, having learned since I had little ones that the time between Thanksgiving & Christmas flies by so quickly, with so many events & obligations, that if I wait until after we carve the turkey, as I used to, I'll barely get to see anything at all.

To me, holding out, makes it sweeter. There's nothing I enjoy more than sitting down to enjoy the first Hallmark movie of the season with my husband and a glass of wine in my decorated -- albeit for Thanksgiving -- house. Waiting until the time of year is upon us, makes it special, a teeny bit sacred and absolutely influences my overall holiday spirit!

Not to mention that movies and specials are an integral part of our family Christmas traditions. The day before Thanksgiving I spend alone in the kitchen, prepping for the big day and watching a marathon of my favorite Christmas films. When everything is set for the feast, we sit down as a family and watch Love, Actually. A movie I've seen, roughly, 1,000,000 times, but still never fails to make me cry. What for many would be a day of drudgery -- 8+ hours of baking, cooking & cleaning -- is, for me, one I look forward to all year long.

We also have a family TV advent calendar, of sorts, letting the kids choose an animated special every night between Thanksgiving & Christmas, that we all watch together. It feels cozy and ramps up the entire clan's Christmas spirit.

Almost all of the above. We've got, probably, 100+ movies and specials -- all of our favs and annual must-sees -- on DVD, blu-ray and/or purchased in iTunes, and my DIRECTV DVR is full thru January with Christmas movies, specials & holiday series episodes. We've also got Netflix, Hulu & Amazon Prime. All are sources for our nightly, holiday TV viewing. Honestly, other than sports, I'd say we don't watch much BUT Christmas-themed fare throughout November & December.

Actually the glut of options, and the sheer, overwhelming amount of annual content, is why I started to make a list of all the new, holiday fare that will be airing each year. What started as a Google doc shared between friends, eventually got put online at http://sleepykittypaws.tumblr.com/, though I still do it primarily to keep track myself of what's out there. 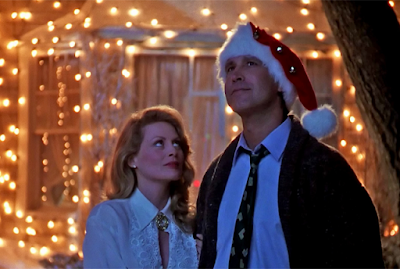 So tough to decide! Years ago I made a list with some friends and struggled to limit myself to 10 choices from various categories (theatrical films, made-for-TV movies, animated specials, classic films) so picking just three total seems pert near impossible, but I'll give it a go ...

1) Christmas Vacation - It is no exaggeration to say I know every word of this film by heart and can (obnoxiously) recite it even before the characters say them onscreen. But even with that, I never get tired of watching Clark's adventures in exterior illuminations or Audrey being frozen from the waist down. Just hearing the opening "Christmas Vacation" theme song & seeing the Santa animation makes me happy. To me, it means, It's that time, Christmas is here and everybody knows there's not a better time of year. 🎅🏼

2) Love, Actually - I've already said we watch this, literally, every single Thanksgiving Eve, and despite seeing it countless times I always cry when Uncle Jamie proposes to Aurelia, Sarah gives her brother the scarf and Emma Thompson learns her husband has given a necklace to someone else. I admit that Hugh Grant danced his way into my heart long before he played the Prime Minister and this movie not only has him at his most affably charming outside Four Weddings and a Funeral, but probably boasts the greatest overall cast ever assembled for a rom-com. Heck, I even cried over the Red Nose Day sequel that debuted this year and am trying to find out where I can get a copy for future re-viewings.

I know Love, Actually can be polarizing but, to me, it's perfect.

3) While my one-two picks came easily, as they're by far my very favorites, deciding on "just one" more is decidedly trickier. Do I go with my all-time favorite animated special, The Grinch?  I honestly can't imagine a Christmas season without seeing it, or Charlie Brown Christmas, or The Year Without a Santa Claus, or A Garfield Christmas. How could I possibly pick just one?

How about The Polar Express, which is the first movie our eldest ever really watched, kicking of a still-secure lifetime love of trains, and is now our family Christmas Eve, viewing tradition? Perhaps my all-time favorite made-for-TV Christmas movie, Holiday Switch, which embodies the cheesy, crazy goodness of its genre by having a Baywatch babe climb through her clothes dryer into an alternate holiday reality? The catchy, feel-good Britishness of Nativity!, whose soundtrack is almost as good as this underrated, sweet, funny film?

But I think if you held a Christmas cracker to my head, I might have to go with the Prep & Landing series (2 specials & 1 short) for sheer classic Christmas spirit, combined with rampant rewatch-ability. The story of Lanny the elf adds new lore to the Christmas canon and delights both kids and adults. Both festive & funny, this is the very best of the modern Christmas specials to my mind. I'm still holding out hope that Disney will deliver a promised third, full-length installment.