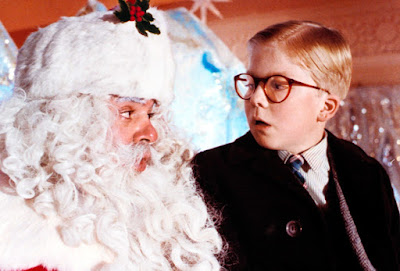 Even though he’s not the central character of the movie, my favorite Santa is the store Santa from A Christmas Story. Now, he often gets kind of a bad rap, being described as “grumpy” or “angry,” but I don’t see it that way at all. He strikes me as a quintessentially Midwestern working class, over-worked guy, and that’s why he’s my favorite. He’s trying to do a nice thing for the kids, but his job is unrelenting and his work environment is ridiculous. The kids have to climb an absurdly high platform to get to him, after which they’re expected to make a rapid descent to the ground floor on an equally absurd and terrifying slide. Management is unreasonable—and Santa says so to his helper elf. The line of kids is endless despite the rapidly approaching closing time of the store. Is Santa going to be paid overtime for his labor? Probably not. His disheveled appearance suggests he hasn’t had a break in a long time, if at all. He’s been on the job so long that all he has left in the way of Santa-y patter is to shout “Ho-Ho-Ho!” The situation has exhausted his Santa reserves and yet he tries to be tender to the kids on his lap. By the time Ralphie scrambles back up to the top of the slide to blurt out what he really wants—a Red Ryder B-B Gun—our world-weary Santa doesn’t have the energy to indulge him with a bit of Santa’s whimsy. Instead, the practical, realistic, overworked Midwestern guy comes out: “You’ll shoot your eye out, kid,” he shrugs, and carefully, gently, pushes Ralphie down the slide with the toe of his boot. Classic.

“Marge Be Not Proud,” from The Simpsons. Every single joke is funny and this episode has a lot of heart. Plus: Lee Carvallo’s Putting Challenge.

I like seeing Christmas entertainment year round, but I don’t usually seek it out. For me, it’s always more powerful during the holidays because it enhances the holiday atmosphere.

I mostly watch via cable, but also DVDs from the library, and some Netflix. The options for viewing are numerous and I am very lazy, so I watch via whatever service is in front of me at the moment, mostly. 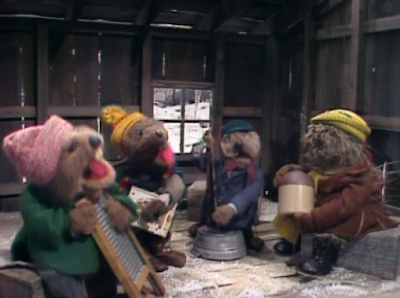 A Charlie Brown Christmas (it’s like a work of classic American literature at this point). Emmett Otter’s Jug-Band Christmas (it has great music, characters, humor and sentiment). Miracle on 34th Street (it’s a movie that I’ve only seen once or twice, so this would be a good opportunity to spend some quality time with it).
Posted by Joanna at 8:27 AM