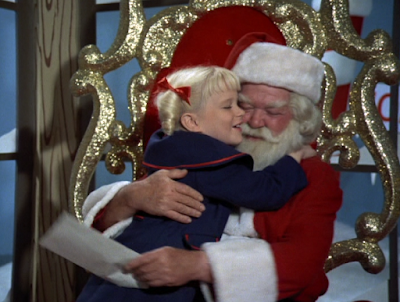 There's been so many portrayals and depictions of Santa Claus over the years, and some of them have become as much a part of my Christmas season as the real Santa at the mall that it's hard to pick just one! One of my favorites is Hal Smith who has played the Man with the Bag in more than a few of my holiday favorites. He first donned the red suit in the season one Christmas episode of The Brady Bunch, "The Voice of Christmas" from 1969. This is the Santa lap which little Cindy Brady sat upon and asked for her mother's laryngitis to be cured in time for Christmas Eve mass. A clip from the Santa scene was also used in the 1989 TV movie A Very Brady Christmas.

Hal Smith also played Santa in a handful of Hanna-Barbera productions including my all-time favorite Christmas episode "Christmas Flintstone" from the 5th season of The Flintstones circa 1964.  Smith voiced Santa again when H-B essentially remade the Flintstones Christmas episode into an hour long special in 1977, creatively titled A Flintstone Christmas. Smith continued to vocally appear as Santa in the Hanna-Barbera productions Casper's First Christmas and Yogi's First Christmas. Both of those cartoons are favorites of mine as well.

Other favorite Santas of mine are Douglas Seale from Ernest Saves Christmas and Paul Frees' performance in the 1969 Frosty the Snowman special. 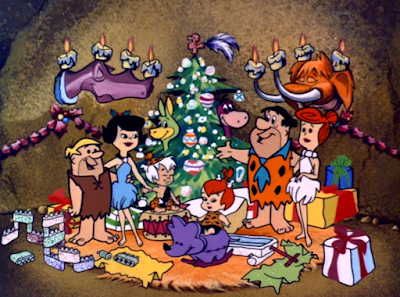 I will watch Christmas movies and TV shows exclusively from Nov.1 through the first week of January - but I have a strict rule about watching any Christmas goodness outside of that extended holiday season. When I was younger I did a Christmas in July and watched a bunch of my Christmas videos over the summer, then when the holiday season was upon us - I felt like I had just watched everything and wasn't up for viewing some of the holiday classics again. That was almost 30 years ago and it's still a memory that has made the November and December Only rule a self-imposed law to this day!

During the year I mostly consume television and movies through DVD and DVR. I subscribe to Netflix and Amazon Prime but find I don't use them as much as the Netflix DVD service. I also use the DirecTV app to scour the TV listing looking for unusual and odd programs and movies to record.  When Christmas time rolls around, I turn into a treasure hunter looking for obscure and unheard of titles that I've never seen before. I'll search out Christmas episodes of series I've never watched and try to find them on air or DVD.  I also have a large collection of Holiday DVD and VHS that I have been amassing since I was a kid in the 80's. Now, I know my collection isn't near as extensive as dear Joanna, but I've upped my game in the past few years. This past year my collection outgrew the large tote I keep them all stored in and I now have DVD and VHS split into separate totes.

If I was stranded on an island, my first mission would not be to try and get rescued right away. I'm a stay-at-home dad with three kids. I would certainly enjoy the peace and quiet of a deserted island for a little while...like maybe a couple of months. My three island video rentals would be: 1) A Charlie Brown Christmas - I could watch that one over and over again and probably never tire of it! 2) Ernest Saves Christmas - Another one I could watch endlessly and Ernest is like a dear ol' buddy to me so he would be some welcome company on the island. 3) A Very Brady Christmas - I would kill the hours by dedicating myself to memorizing every line of dialog from this fine 1988 TV-movie!