I know that SNL has put out many hilarious holiday-related sketches, and perhaps this isn't their best one, but it's the one that pops into mind automatically and makes me laugh... the infamous "Dick in a Box." It's so ludicrous. I love how Andy Samberg and Justin Timberlake act so seriously throughout the whole video as do Maya Rudolph and Kristen Wiig. It's really juvenile and totally stupid, but it's also just plain ridiculous and funny. I sometimes wonder how this sketch would've turned out if it had paired Jimmy Fallon and Justin Timberlake. Well, it doesn't really matter, this one is a classic (even if it's for the wrong reasons!)

I love most of it. I'll make an effort each year to watch as much holiday programming as time permits, but, in recent years, I haven't had as much time to watch as in the past. My brother and I share a passion for holiday programming since we were children. For a number of years, he has prepared a list of specials, movies, animation programs and more that he plans on watching each season. For the past few years, I've started doing the same. I add to this list throughout the year as I learn or read about programs I don't know about. Among other things, we both like finding obscure tv movies from the 1970s and 1980s, and sharing our observations with each other. There are a few staples that I do look forward to each year that I've been watching for decades. These animation specials were among our favourites growing up and I now like to watch these with my four children: A Garfield Christmas Special (I just love this one!), 'Twas the Night Before Christmas (the Rankin/Bass special), the original How the Grinch Stole Christmas (I love this one too!) and A Pink Christmas (I really enjoy the simplicity of this one). So, in looking back at your original question, I guess that I look forward to watching animation specials the most, but I could probably just as easily offer an argument for other types of programming such as holiday movies (classics and newer ones) as well as other specials and early tv movies. I end up anticipating so many hours of holiday viewing pleasure only to end up disappointed at how quickly the season has passed. 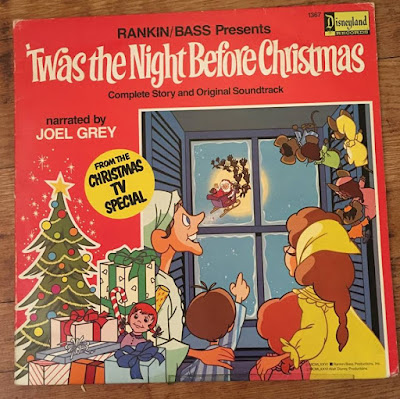 I have a few answers here. In my entry for last year's Christmas in July party, I mentioned that I love the Andy Williams Christmas specials. I discovered these by watching a PBS pledge drive where they showed a compilation of some of his best numbers done throughout the years and they interspersed this montage with celebrity interviews. It was really well done. Although I haven't seen all of his annual specials, you could probably pick any one of these specials and you'd have the perfect holiday soundtrack. Most of his specials included both religious and secular songs performed by Williams himself and, in many cases, with others including his brothers and the Osmonds. There is something about these specials that make them stand out.

My second thought would be to consider the Rankin/Bass specials. So many of these have songs arranged by Murray Laws with lyrics written by Jules Bass, which have become classics. I mentioned this earlier, but one of my favourite Rankin/Bass specials is 'Twas the Night Before Christmas. I have the vinyl LP for this special and, I can't really pinpoint why, but I truly enjoy watching this short program and listening to its soundtrack. I'm hypothesizing here, but nostalgia probably explains why I like this particular entry in the Rankin/Bass canon. Each year, growing up, my brother and I would end our Christmas Eve programming marathon by watching this one. The special only has three songs, but they are thoughtful and entertaining: "Give Your Heart a Try," "Even a Miracle Needs a Hand" and "Chimes are Calling (Santa, Santa)." (The latter is heard throughout the special and is quite catchy). Obviously, many Christmas specials have great soundtracks and I wanted to highlight two examples that stand out for me.

This is great question. Four or five years ago, I discovered your blog and read all of its posts within a two-month period. I was so impressed by the details, the screenshots, the comments from other readers. I started a spreadsheet to capture episodes, movies or other titles that sparked interest and that I hadn't seen. I still have this list and turn to it frequently (along with your great encyclopedia). So, prior to answering your question, I used the search box on your site to query its content to see if you had written something about Nilus the Sandman: The Boy Who Dreamed Christmas. This 1991 Canadian special combined a live action introduction and conclusion with an animated story taking place while our main character falls asleep and is guided by Nilus to visit Santa at the North Pole on Christmas Eve. The story is simple and common, but this special resonates with me (and my brother - again!). I was surprised to discover, while writing this answer, that I was 14 years old when this special first aired! Seems a bit odd for me to cherish it as if it were something that I watched when I was a younger child, but there is something about it that I enjoy even now as an adult. There are funny segments within it and it might warrant a longer essay on your blog.

I have noticed a few trends over the past decade or so. First, the plethora of Hallmark-style tv movies. I know that these movies have devoted fan bases, but I can't help but dream of the day that will perhaps see the return of stories reminiscent of tv movies of yesteryear that had more meaningful and realistic plotlines. The tv movies of the 1970s and 1980s (and, one could argue, even some in the early 1990s) had a sincere message to deliver rather than a sappy and predictable storyline. I can watch one or two of these movies with my wife per year, but that's about it. I have discovered the Deck the Hallmark podcast which is fantastic. Knowing that I can turn to one of their episodes after watching one of the Hallmark movies makes it more bearable. Their shows are so funny!

The second trend I have noticed is the lack of great holiday feature films. The last great film to come out of Hollywood, in my opinion, was Elf back in 2003 (with a few other ones during that decade of the 2000s). However, since then, it seems like Hollywood has failed to deliver anything meaningful and, even when trying to remake tried and tested stories, the end results fail to inspire and entertain us (or, at least, me).

Finally, my third observation is a renewed interest in tv holiday musical specials. I wasn't around during the golden era of the Andy Williams specials or of the Bing Crosby, Perry Como, Frank Sinatra ones, but there's something about them that I truly enjoy. It seems that, in recent years, there has been a bit of a resurgence of this kind of programming. I really enjoyed the Michael Bublé specials and was surprised by the quality of more recent ones featuring, among others, Pentatonix, John Legend, Reba, Blake Shelton as well as the yearly CMA specials. It's always fun to have these in the background while wrapping the kids' presents. I hope that this trend continues.