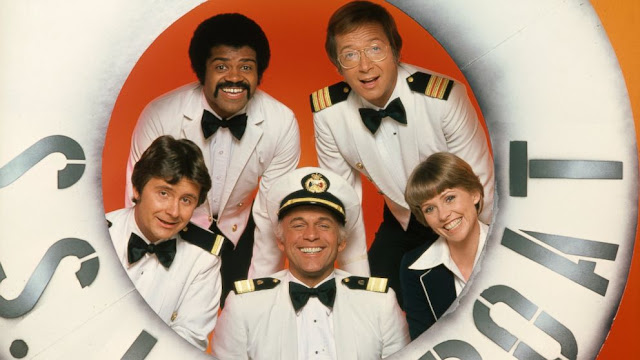 Happy Christmas in July! It's Day #27 of the Christmas in July party. All month long I'll be celebrating Christmas TV episodes, specials, and movies with a FUN IN THE SUN attitude. Expect a run of Christmas in July stories, tropical yuletides, and island themes. Just a little something different and a way for me to show off the diversity of holiday stories I've collected in the encyclopedia Tis the Season TV (the updated and expanded 2nd edition being released later this year).

Today's Christmas in July discussion is on the 1980 Christmas episode of The Love Boat. This fourth season episode sees the cruise ship's destination as Mexico (either Acapulco or Puerto Vallarta).

The episode "The Captain’s Bird/That’s My Dad/Captive Audience" features three story lines (as usual). In “The Captain’s Bird,” Captain Stubing puts Gopher in charge of acquiring Vicky’s Christmas present--a talking parrot. Unfortunately, the bird repeats nasty insults. In “That’s My Dad,” a young abused boy named Scott stows away on the Pacific Princess and is befriended by a single man Jeff who the cruise staff mistakes for his father.

And, in “Captive Audience,” a father and son Richard and Bob Braddock reunite after years of not talking. In this story, Rich and Bob are both professional entertainers played by singers Allan Jones and Jack Jones who are real-life father and son. Jack Jones is also the performer who croons The Love Boat series theme song.

In this episode, Jack Jones takes the stage to sing the holiday standard “Winter Wonderland.”

This disco version of The Love Boat theme makes me want to watch the whole TV series all over again! Enjoy.