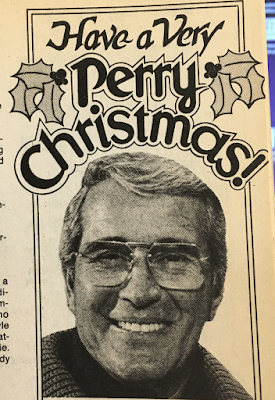 Happy Christmas in July! It's Day #18 of the Christmas in July party. All month long I'll be celebrating Christmas TV episodes, specials, and movies with a FUN IN THE SUN attitude. Expect a run of Christmas in July stories, tropical yuletides, and island themes. Just a little something different and a way for me to show off the diversity of holiday stories I've collected in the encyclopedia Tis the Season TV (the updated and expanded 2nd edition being released later this year).

Perry opens his show relaxing on the beach singing Irving Berlin’s “Happy Holidays” and “Christmas in Hawaii.” Perry and Marie Osmond enjoy a hayride over the lush green Hawaiian terrain while singing “Sleigh Ride” and “Jesus Is Born Today.” Next, Marie and Perry attend a Christmas luau, and together they sing “Mele Kalikimaka.” Como and actor Burt Reynolds share a conversation on the beach, and sing “In the Cool, Cool, Cool of the Evening,” “How About You?,” and “Don’t Fence Me In” together. The Hawaiian Young Singers perform “Joy to the World” at a historic church on the islands. Perry joins the Young Singers to sing “Deck the Halls” as they decorate a Christmas tree together, and then “Silent Night.” Marie and Perry also take an island tour, and go deep sea fishing. The couple duets on “Far Away Places.”

Perry joins a group of children building a sand (snow)man on the beach, and he sings “Santa Claus is Coming to Town.” Perry notes how Hawaii is a location that inspires romance, and Marie sings “There’s No Stoppin’ Your Heart,” followed by Perry and Marie singing Stevie Wonder’s hit song “I Just Called to Say I Love You.” A Hawaiian children’s choir sings “The Little Drummer Boy” with bamboo percussive instruments. On the beach, there’s a Hawaiian-style living Nativity display. A chorus sings “It Came Upon a Midnight Clear,” Perry Como performs “The First Noel,” Marie Osmond sings “Away in a Manger,” and Perry sings “O Holy Night.” And, Como with the Kamehameha Choir perform “Ave Maria” in the hills above the beach.

Sorry this clip isn't a Christmas song. But it was just too good, too kitchy and too campy to not share!

Perry Como entertained at Christmas on TV for decades, on his own series and with annual holiday variety specials. However, in 1975 he began an annual tradition of Christmas specials shot away from stuffy, confined network studios and took his cameras to exotic locations, often shooting outdoors.

The best thing about Como's destination holiday specials was his immersion in the culture. He usually included artists and performers from the local culture to perform in their native language. He also filmed at local landmarks and included remarks about local customs and Christmas traditions. From the summary above, you can see how Como's special included Hawaiian artists and attempted to reflect the customs and traditions of the region. This is typical of the other destination Christmas specials as well.

Our Christmas in July party discussions will continue all month long. Got another favorite tropical, Christmas in Hawaii program? There's more to come. Feel free to leave comments down below.