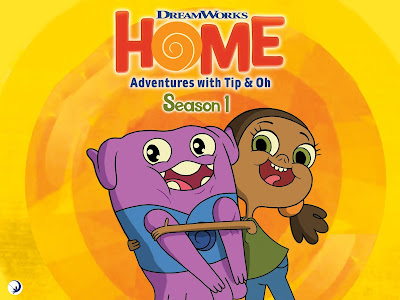 Happy Christmas in July! It's Day #11 of the Christmas in July party. All month long I'll be celebrating Christmas TV episodes, specials, and movies with a FUN IN THE SUN attitude. Expect a run of Christmas in July stories, tropical yuletides, and island themes. Just a little something different and a way for me to show off the diversity of holiday stories I've collected in the encyclopedia Tis the Season TV (the updated and expanded 2nd edition being released later this year).

Today's Christmas in July episode is from the animated series Home: Adventures of Tip & Oh, adapted from the 2015 Dreamworks movie. In season 1 of the Netflix series is the holiday episode "Sant-Oh" which takes place in the summer time.

An extreme heat wave sweeps through Chicago and Tip goes looking for a fan. Oh finds a box in storage marked “Christmas” and learns about Santa Claus. Donning a Santa suit in his own unique way, Oh takes it upon himself to deliver magical orbs to everyone in Chicago to help them lower their body temperature (and bring relief for the heat wave). But Oh’s Santa is mistaken for a home invader and Chicagoans don’t know how to use the magical cooling orb.

This charming story (and series) playfully imagines aliens and humans sharing their lives. This may not be the first series to do this, but here its done well and in a way that children can relate to seeing their lives from an outsider's perspective.

In 2017, there was an hour-long Christmas special "Home for the Holidays" from Home: Adventures of Tip & Oh released on Netflix as well. That program features special guest voice actors Kelly Clarkson and Ben Schwartz as themselves.

Today's discussion is the last of the "Christmas in July" stories before I move on to a new theme: summer camp Christmas. Trust me--it's going to be fun too! There's more to come in our Christmas in July party--follow along each day this month for more reminders of summertime holiday fun.