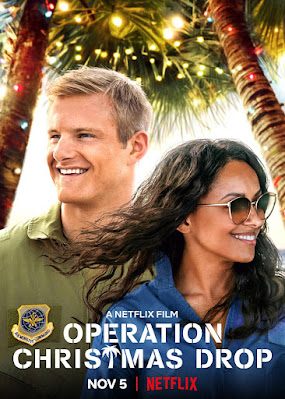 Happy Christmas in July! It's Day #24 of the Christmas in July party. All month long I'll be celebrating Christmas TV episodes, specials, and movies with a FUN IN THE SUN attitude. Expect a run of Christmas in July stories, tropical yuletides, and island themes. Just a little something different and a way for me to show off the diversity of holiday stories I've collected in the encyclopedia Tis the Season TV (the updated and expanded 2nd edition being released later this year).

This week I have been sharing Hawaiian yuletide programs, however lets move a little further across the Pacific Ocean to Guam. Today's Christmas in July discussion is on the 2020 Netflix movie Operation Christmas Drop.

This Netflix Christmas movie is set on a military base in Guam. In this story, Erica is hoping to be promoted to Chief of Staff working for Congresswoman Bradford in Washington D.C. When Erica is given the order to fly to Guam for Christmas to investigate the military involvement in Operation Christmas Drop, she does it. Bradford’s investigation is looking for justification to de-fund unnecessary military bases. She arrives on the island and is given a very thorough tour by a pilot named Andrew. Recognizing she’s being distracted from the personnel’s real actions, Erica investigates the island by herself. She learns about the humanitarian effort by off-duty military to distribute essential goods and supplies to remote areas in the South Pacific. Erica’s holiday spirit is renewed and she comes to see the value of the military to the local islanders in the area, but she's concerned about convincing her boss Congresswoman Bradford.

The cast includes Kat Graham as Erica, Alexander Ludwig as Capt. Andrew, and Virginia Madsen as Congresswoman Bradford. Brother Bruce Best is played by the real-life do-gooder who volunteers as the outer island liaison.

The above video is actual footage of Operation Christmas Drop performed in 2019. The visually stunning views and efforts to help others is inspiring material for a feel-good Christmas movie.

The Netflix film captures views like no other Christmas TV movie, including underwater snorkeling, and shots out the back of a cargo plane cruising over islands, beaches and ocean. Make sure to watch the movie through the end credits in order to see more historic photos of the real-life Christmas air drops in the South Pacific across the past 50 years.

The movie was filmed at the Andersen Air Force Base in Guam, a stop that Bob Hope's USO tours also made when traveling through the Pacific with his Christmas shows.

Our Christmas in July party discussions will continue all month long. Got another favorite tropical Christmas program? There's more to come. Feel free to leave comments down below.