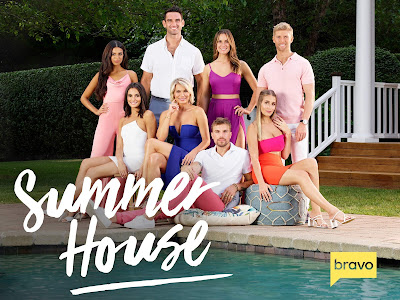 Happy Christmas in July! It's Day #16 of the Christmas in July party. All month long I'll be celebrating Christmas TV episodes, specials, and movies with a FUN IN THE SUN attitude. Expect a run of Christmas in July stories, tropical yuletides, and island themes. Just a little something different and a way for me to show off the diversity of holiday stories I've collected in the encyclopedia Tis the Season TV (the updated and expanded 2nd edition being released later this year).

This week I'm sharing summer camp yuletide stories. Today's Christmas in July discussion is from the opposite end of the spectrum from children's TV series--a debauched reality series from Bravo: Summer House.

In the season 3 episode "Epic Grand Gesture," the Hamptons beach house roommates decide to throw a Christmas in July-themed party to honor Jordan and Amanda’s birthdays. On Friday night, the roommates decorate a Christmas tree, make cookies, hang mistletoe and lights. On Saturday, the guys set up a foam machine to make “snow” and arrange the festive inflatables in the pool. The friends don their holiday beach wear and exchange Secret Santa gifts. After the drinks flow from the ice sculpture, the “snow” fills the pool area in the backyard. Everyone agrees Carl is a Grinch for behaving as he does around Paige. Kyle gives Amanda a surprise for her birthday--they have a new apartment.

The Christmas in July story continues into the next episode "Ring Around the Rumor." While the wild party is still going on, Paige overhears Carl talking to Lindsay about how she’s wasting his time. Paige talks to Carl directly and lets him know how he has disappointed her. The party continues into the night when all the roommates go out to a bar. The next morning, all the Christmas decorations have to be cleaned up and put away before they leave the Hamptons. Later in the week, Lindsay feels burdened after hearing another rumor that Kyle was unfaithful to Amanda.

Christmas in July on TV is really more diverse than one may initially expect. Our Christmas in July party discussions will continue all month long. Got another favorite summer camp Christmas episode? There's more to come. Feel free to leave comments down below.