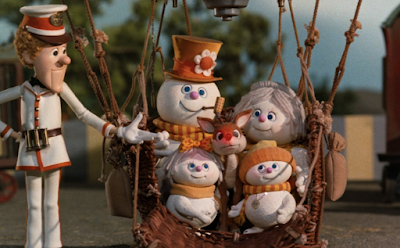 Happy Christmas in July! It's Day #5 of Christmas in July party. All month long I'll be celebrating Christmas TV episodes, specials, and movies with a FUN IN THE SUN attitude. Expect a run of Christmas in July stories, tropical yuletides, and island themes. Just a little something different and a way for me to show off the diversity of holiday stories I've collected in the encyclopedia Tis the Season TV (the updated and expanded 2nd edition being released later this year).

For the last couple days, I've been looking at Christmas stories from the Southern Hemisphere. The December holiday down under takes place during the summer. Then on the 4th, I shared a Christmas episode about a flag. Today I'd like to start a run of discussions with a Christmas in July theme. Here we go.

In the summer of 1979, Rankin/Bass released the feature-length, stop-motion animated Rudolph and Frosty's Christmas in July into theaters overseas before airing on television in the United States. The movie brings together many of the favorite Rankin/Bass Christmas characters from previous TV specials. For the first time, we see Frosty the Snowman in stop motion and not traditional cel animation, like Rankin/Bass' 1969 TV special and the 1976 sequel. Although the story takes place over the Fourth of July holiday, this film now regularly airs on TV at Christmas time.

In this story, the wicked tyrant King Winterbolt has always had his magic power tempered by Lady Boreal, Queen of the Northern Lights. But Winterbolt is jealous of the popularity of Santa Claus and wants Santa’s admirers to be his own. Winterbolt moves to jeopardize Christmas by eliminating Rudolph’s glowing red nose which allows Santa to deliver his gifts in adverse weather conditions. Winterbolt decides to take advantage of a situation that Rudolph and Frosty are already involved in.

Rudolph, Frosty, his wife Crystal and their two children, as well as Santa and Mrs. Claus are all taking a summer vacation to visit the Circus By the Sea over the Fourth of July holiday. They are there to help their friend Milton the Ice Cream Man get married to high wire walker Lanie Loraine. But Lanie won’t marry Milton until the financial troubles of the circus are over. So Rudolph, Frosty and the gang offer to perform at the circus to help raise the required money. Unaware of his motives, the Frostys accept magical amulets from Winterbolt that will prevent them from melting in the July heat. However, they must return to the North Pole before the end of the fireworks display on the Fourth. Santa Claus promises to fly the Frosty family home before they melt so they too can enjoy a summer vacation.

However, Winterbolt has sabotaged their vacation from the start.  He sends a tornado storm to drive Santa and Mrs. Claus’s sleigh out of the sky, forcing them to never arrive at the Circus By the Sea. Winterbolt also sends a devious reindeer named Scratcher to set up Rudolph to take the blame for stealing the circus’ profits. Rudolph loses the power of his glowing nose when he takes the blame for the wrongdoing--a sacrifice made to prevent the Frosty family from melting when Santa’s sleigh doesn’t arrive in time on the Fourth.

This classic tale has a complicated story but iconic imagery as well. Both Rudolph and the Frosty family perform at the Circus By the Sea. This circus is run by Lanie’s mother, Ms. Lilly Loraine who dresses in a cowgirl outfit. This character is voiced by the unforgettable Ethel Merman. The role is certainly a nod to Merman’s outstanding Broadway role as Annie Oakley in the long-running show Annie Get Your Gun.  King Winterbolt is also a major character in this story that makes a lasting impression. He rides atop a sleigh pulled by snakes and uses snow dragons to create his crippling winter storms.

But the one outstanding feature of this movie is the reunification of many of the TV characters from previous Rankin/Bass specials. This movie not only features Rudolph the Red-Nosed Reindeer but also Frosty the Snowman, his wife Crystal, Santa Claus and Mrs. Claus, Jack Frost, and the giant whale Big Ben from Rudolph’s Shiny New Year.  Making this reunion better is that the characters are all voiced by their original actors as well.

The songs in this musical include “Rudolph the Red-Nosed Reindeer,” “Everything I’ve Always Wanted," “Christmas in July,” “Chicken Today and Feathers Tomorrow,” “I See Rainbows,” “Don’t Let The Parade Pass You By,” “I Heard the Bells on Christmas Day,” “Rockin’ Around the Christmas Tree,” “No Bed of Roses,” “Frosty the Snowman,” “Now and Then,” and “We’re a Couple of Misfits.” Too bad there was never an official soundtrack release on vinyl (like several other Rankin/Bass programs).

Here's a substantial clip about the story of Winterbolt.

Thanks for reading along. More Christmas in July TV episodes, specials, and movies coming up.