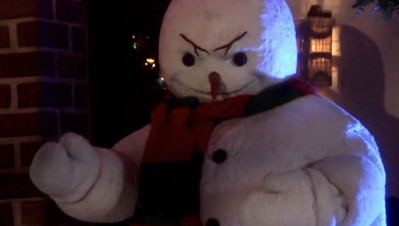 Happy Christmas in July! It's Day #26 of the Christmas in July party. All month long I'll be celebrating Christmas TV episodes, specials, and movies with a FUN IN THE SUN attitude. Expect a run of Christmas in July stories, tropical yuletides, and island themes. Just a little something different and a way for me to show off the diversity of holiday stories I've collected in the encyclopedia Tis the Season TV (the updated and expanded 2nd edition being released later this year).

Today's Christmas in July discussion is on the 2000 campy horror/comedy Jack Frost 2: Revenge of the Mutant Killer. This low-budget film is a sequel to the 1997 camp classic Jack Frost that deviates from the killer Santa Claus model to explore a deadly snowman character. This movie fits our Christmas in July theme because the 2000 sequel takes place in the tropical Caribbean.

If you'll remember, the first movie sees a serial killer named Jack Frost escape a death sentence with the electric chair when his prison transport truck overturns in a road accident. The killer is mutated by genetic material spewing from the truck in the collision. Jack Frost transforms into a snowman hell-bent on exacting revenge upon the sheriff and the little town where he was first captured and sent to prison.

In the sequel, the sheriff and his wife try to escape the memory of the last miserable Christmas by going on a tropical vacation. Unfortunately, the chemical company has unearthed the serial killer Jack Frost to discover the mutant formula that brought him to life. This allows the serial killer to re-form and follow the sheriff to his Caribbean vacation. Making things worse, Jack has outgrown his resistance to anti-freeze and has learned how to reproduce, populating the tropical paradise with killer baby snowballs! Be sure to grab a banana daiquiri when you watch this fun movie.

The cast includes Christopher Allport as Sam, Eileen Seeley as wife Anne, Chip Heller as Joe, and the voice of Jack MacDonald as Jack Frost.