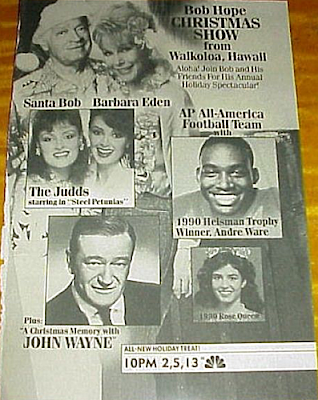 Happy Christmas in July! It's Day #19 of the Christmas in July party. All month long I'll be celebrating Christmas TV episodes, specials, and movies with a FUN IN THE SUN attitude. Expect a run of Christmas in July stories, tropical yuletides, and island themes. Just a little something different and a way for me to show off the diversity of holiday stories I've collected in the encyclopedia Tis the Season TV (the updated and expanded 2nd edition being released later this year).

This week I'm moving on to share Hawaiian yuletide programs. Today's Christmas in July discussion is on the 1989 TV variety special Bob Hope's Christmas Show from Waikoloa, Hawaii. Bob Hope’s guest stars are Barbara Eden, The Judds, the Associated Press’ All America Football Team, and Rose Queen Yasmine Delawari. The show is shot at the Hyatt Regency in Waikoloa, Hawaii.

Comedian Bob Hope opens his variety show, like he does every year, on stage with a comedy monologue. Here, he does it on a stage outdoors at the Hyatt Regency in front of a live audience. Next, Naomi and Wynonna Judd perform as The Judds singing “Beautiful Star of Bethlehem.” Actor Barbara Eden joins Hope on stage to exchange punchlines. The show continues with a second monologue by Bob in front of a live audience. This is followed by Hope introducing the latest Associated Press’ All America Football Team. Hope and Eden stroll through the palm trees and tiki torches to sing “Silver Bells.” This is followed by a comedy sketch “Steel Petunias” a parody of the movie “Steel Magnolias.” The sketch features Naomi Judd as Sally Field’s character M’Lynn, Wynonna Judd as Julia Roberts’ character Shelby, Barbara Eden as Shirley MacLaine’s character Ouiser, and Bob Hope in drag playing Dolly Parton’s role Truvy. Next, Hope introduces the beauty pageant winner 1990 Rose Queen Yasmine Delawari and they volley jokes back and forth. The Judds harmonize on “Winter Wonderland” standing above a waterfall feature. Once again, Hope re-airs the clip of himself with John Wayne, first recorded on Hope’s Christmas special in 1976 in which they sing “Have Yourself a Merry Little Christmas.”

Bob Hope is well known for his two types of Christmas variety specials. First are his Christmas USO tours escorting dancers, singers, and comedians around the world to various American military bases to entertain the soldiers. Second are Hope's network studio Christmas variety specials. This 1989 one is later in Hope's career. It combines the outdoor location stage productions of the USO tours with the production values of the more controlled studio specials.

Our Christmas in July party discussions will continue all month long. Got another favorite tropical, Christmas in Hawaii program? There's more to come. Feel free to leave comments down below.