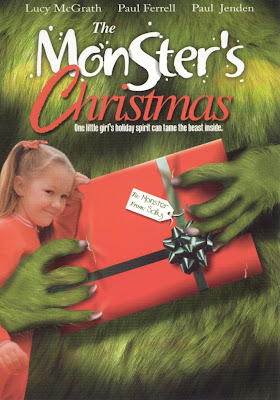 It's Day #3 of Christmas in July. All month long I'll be celebrating Christmas TV episodes, specials, and movies with a FUN IN THE SUN attitude. Expect a run of Christmas in July stories, tropical yuletides, and island themes. Just a little something different and a way for me to show off the diversity of holiday stories I've collected in the encyclopedia Tis the Season TV (the updated and expanded 2nd edition being released later this year).

For the last couple days, I've been looking at Christmas stories from the Southern Hemisphere. The December holiday down under takes place during the summer. 1981's The Monster's Christmas was made for New Zealand TV and was shot there featuring a landscape that is uniquely New Zealand.

This is a one hour long, live-action TV special with imaginative, almost psychedelic characters and costumes, shot on location in Waiotapu Thermal Wonderland. It is a New Zealand park with rare, geologic features making the setting seem all the more visually otherworldly. In the story, a little girl reads a book on Christmas Eve about monsters losing their voices due to an evil witch’s spell. Upon meeting one of these voiceless monsters, the little girl is filled with compassion and sets out on a long journey to help recover the monsters’ voices to allow them to once again sing Christmas carols which they love to do. Actor Lucy McGrath plays the little girl. It is directed by Yvonne Mackay.

This is just as bonkers and outrageous as it sounds. This TV program was originally made for children’s television in New Zealand, aired in the United States on Showtime, and is now easily found on DVD.

The same creative team made 1982's Nearly No Christmas, another live action, holiday special for New Zealand television. It's a story about Santa Claus who needs money so badly that he takes a job working as Father Christmas at a department store over the holidays. The depiction of Santa's workshop includes penguins, furthering the idea that Santa's home is actually the South Pole instead of the North Pole!? Only in a Down Under Christmas.

Thanks for reading along. Stop in again tomorrow because I've got a special Christmas episode to discuss for the 4th of July!