Happy Christmas in July! It's Day #22 of the Christmas in July party. All month long I'll be celebrating Christmas TV episodes, specials, and movies with a FUN IN THE SUN attitude. Expect a run of Christmas in July stories, tropical yuletides, and island themes. Just a little something different and a way for me to show off the diversity of holiday stories I've collected in the encyclopedia Tis the Season TV (the updated and expanded 2nd edition being released later this year).

In this first episode of the series, the three teams must construct a scene interpreting the holiday theme of Mele Kalikimaka--Christmas in Hawaii. The mother-daughter team of Tracy & Renee are working on a one-story beach house decorated for Christmas. The team of friends Greg & Katie are constructing an Aloha Abode: a three-story Barbie Dreamhouse in a tropical setting. And the team of fiancés Amanda & Bree are constructing Santa’s tiki boat anchored off the beach. After the teams begin working, the challenge of a water feature is added. Tracy and Renee win the challenge with their coy pond. The teams are adding details to their structures up until the final seconds of the competition. The winners move on to the finalé. 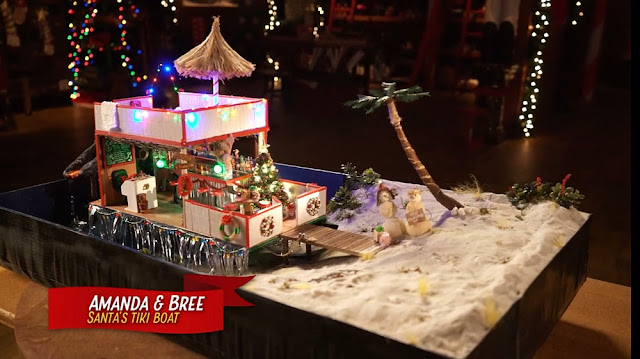 This four-episode series is an example of a new style of series that has recently EXPLODED on television: reality competition Christmas series. I'm not talking about a single Christmas episode found within a series. I'm referring to whole series in which every episode is Christmas-themed. Biggest Little Christmas Showdown is an example, but so is The Great Christmas Light Fight (on ABC), Holiday Baking Championship (on Food Network), Christmas Cookie Challenge (also on Food network), Top Elf (on Nickelodeon), The Christmas Caroler Challenge (on the CW), Buddy Vs. Christmas (also on Food network), Wrap Battle (on Freeform), Rocket Around the Xmas Tree (on Discovery), Sugar Rush Christmas (on Netflix), Cake Wars Christmas (also on Food network), Christmas Cookie Matchup (on Hallmark Drama), Holiday Home Makeover with Mr. Christmas (on Netflix), Nailed It Holiday (on Netflix), and more. These are all reality competition series with contestants competing in activities as diverse as cookie baking to rocketry to choir-singing to gift wrapping to building miniatures! It's an exciting time to be watching Christmas entertainment, right?

Got a favorite Christmas reality competition series? Feel free to leave comments down below. Our Christmas in July party discussions will continue all month long.