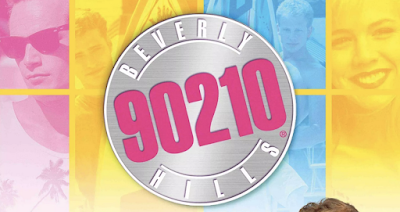 Merry Christmas in July! It is Day #2 in the month-long celebration of Christmas entertainment. As announced before, each day this month I will be sharing brief reminisces about Christmas TV episodes, specials, and movies with a IT'S A WONDERFUL SUMMER attitude. Yes--this month I'm sharing brief essays about TV adaptations of the 1946 movie "It's a Wonderful Life" along with TV programs with significant references to the movie. Just a little something different and a way for me to show off the diversity of holiday stories I've collected in the encyclopedia Tis the Season TV (the updated and expanded 2nd edition being released soon).

Today's discussion is on the third season episode of the teen soap Beverly Hills, 90210 entitled "It's a Totally Happening Life." The story is organized around two angels named Miriam and Clarence looking over the 90210 gang, worried about the teens’ Christmas spirit. Andrea Zuckerman has been accepted at Yale but her boyfriend breaks up with her and she’s depressed. Brandon Walsh’s girlfriend breaks up with him and he’s upset. Steve Sanders feels left out because he’s unable to participate in school activities due to his detention. Kelly Taylor, Brenda Walsh, and Dylan McKay are upset with each other because their friendship is in jeopardy due to their failed romances. David Silver worries about his friends graduating and moving on without him. And, Donna Martin is responsible for a children’s Christmas party and her distracted friends aren’t much help.

A miraculous intervention sees the gang supernaturally escape a bus accident with a drunk driver on their way to the children’s charity Christmas party. The humbling event causes the friends to rethink their selfish problems and look to help each other.

This episode includes guardian angels, several instances of the characters watching the 1946 movie “It’s a Wonderful Life,” Donna hearing a bell ringing from a tree, and the end of the episode includes the black-and-white footage of the bell ringing from the ending of the movie “It’s a Wonderful Life.” Although this episode’s story is not an adaptation of the movie--no one wishes they were never born and experiences what life would be like for their friends and family if this were true. However, this fun episode certainly makes many meaningful references to the movie’s story.

Were you a fan of the hugely successful Fox network teen drama? Feel free to leave your comments below. Merry Christmas in July!