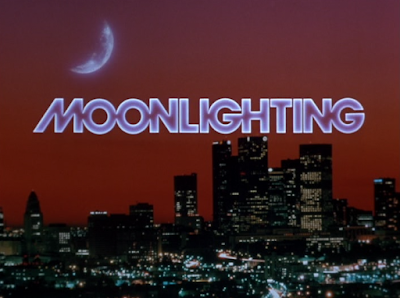 Merry Christmas in July! It is Day #20 of the month-long celebration of Christmas entertainment. Each day this month I will be sharing brief reminisces about Christmas TV episodes, specials, and movies with a IT'S A WONDERFUL SUMMER attitude. Yes--this month I'm sharing brief essays about TV adaptations of the 1946 movie "It's a Wonderful Life" along with TV programs with significant references to the movie. Just a little something different and a way for me to show off the diversity of holiday stories I've collected in the encyclopedia Tis the Season TV (the updated and expanded 2nd edition being released soon).

Today's discussion is on the third season episode "It's a Wonderful Job" from the detective series Moonlighting starring Cybill Shepherd and Bruce Willis. This episode departs from the style and tone of a typical Moonlighting episode--its wisecracking irreverence and flippancy is absent in this emotional Christmas story.

In this tender re-telling of It’s a Wonderful Life, detective agency owner Maddie Hayes comes to regret her life and work when the employees of Blue Moon Investigations are angry with her for making them work over Christmas. Maddie feels unappreciated and regrets her own sacrifices to keep the business open. She's sad enough to contemplate suicide on the rooftop of a high-rise building when her guardian angel Albert comes to her, willing to make her wish that she'd never opened the agency come true.

Albert shows her what life would be like if she had never taken over the agency. Maddie sees that Blue Moon would now be Hart Investigations--the detective agency run by Jonathan and Jennifer Hart, as in the TV series Hart to Hart. Hart to Hart ran on the ABC network from 1979-84 and Moonlighting also ran on ABC starting in 1985. The implication here is a pop culture/TV reference and inside joke that if Maddie never started the Blue Moon Agency, then Hart to Hart would have lasted longer!

Miss DiPesto would be a cold-hearted corporate executive, a business-focused person Maddie unhappily recognizes as someone like herself.

And, David Addison is marrying model Cheryl Tiegs. This is meaningful when viewers remember that Maddie used to be a model too and in a world where David and Maddie never work together, he chooses to fall in love with another model--just not her. Albert and Maddie overhear David speaking with his brother Richard about how he's not really happy even though he's marrying a beautiful woman like Cheryl Tiegs. Although Maddie feels jealous, this news breaks Maddies' heart.

In this emotional story, Maddie sees how her friends' lives are all effected for the negative if she had never opened Blue Moon. But she's overwhelmed with regret when she learns her own life would be meaningless without the agency too--she wouldn't have any friends and she would be suicidal at the holidays. Maddie begs her guardian angel to take her back to her own life and she awakens in the bar where she first met Albert. She returns to the agency and apologizes to her staff.

This TV adaptation of It's a Wonderful Life is especially emotional and touching considering the series is usually far less serious. However, the quirky pop culture references are still abundant. Do you have a favorite TV adaptation of It's a Wonderful Life? There are so many--and there are more discussions coming all month long during this Christmas in July marathon. Merry Christmas in July!