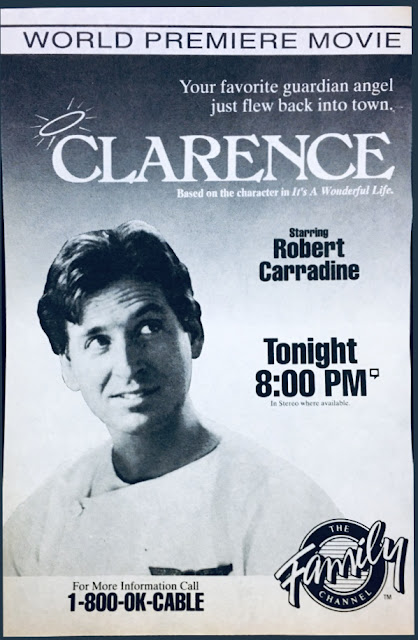 Merry Christmas in July! It is Day #10 of the month-long celebration of Christmas entertainment. As announced before, each day this month I will be sharing brief reminisces about Christmas TV episodes, specials, and movies with a IT'S A WONDERFUL SUMMER attitude. Yes--this month I'm sharing brief essays about TV adaptations of the 1946 movie "It's a Wonderful Life" along with TV programs with significant references to the movie. Just a little something different and a way for me to show off the diversity of holiday stories I've collected in the encyclopedia Tis the Season TV (the updated and expanded 2nd edition being released soon).

Today's discussion is on the feature-length drama Clarence which first aired on the Family Channel on Nov. 22, 1990. The TV movie is not set during Christmas time, but the story's title character is Clarence Oddbody, the guardian angel who first helped George Bailey in the 1946 movie It's a Wonderful Life. In this story, Clarence is sent back to Earth to help the family of a fellow angel. The wife, now widow, Rachel is struggling to keep her deceased husband’s computer software company in business, and her two children on course. Clarence breaks every rule and restriction given to angels. Can he finish the project he was sent to Earth to complete?

This TV movie comedy was a joint New Zealand-Canada production.

Although the story is not set at Christmas, Clarence made its debut at holiday time and draws upon a beloved character associated with Christmas. The TV movie Clarence also points to the continued influence and popularity of Frank Capra's holiday hit, since it was made 44 years after It's a Wonderful Life's debut. Merry Christmas in July.