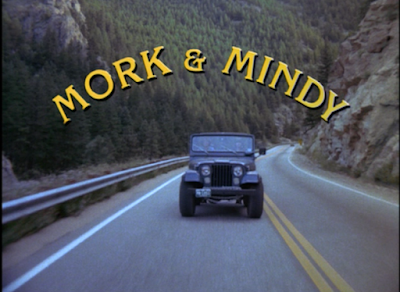 Merry Christmas in July! It is Day #14 of the month-long celebration of Christmas entertainment. As announced before, each day this month I will be sharing brief reminisces about Christmas TV episodes, specials, and movies with a IT'S A WONDERFUL SUMMER attitude. Yes--this month I'm sharing brief essays about TV adaptations of the 1946 movie "It's a Wonderful Life" along with TV programs with significant references to the movie. Just a little something different and a way for me to show off the diversity of holiday stories I've collected in the encyclopedia Tis the Season TV (the updated and expanded 2nd edition being released soon).

Today's discussion is on the first season episode "It's A Wonderful Mork" from the sitcom Mork & Mindy. I first wrote about this episode on the website in 2012. It's worth discussing again for It's a Wonderful Summer marathon.

Feeling like he's unneeded and useless, Mork goes to his alien boss Orson with his regrets and is offered a solution. Mork can be "reversified" with the aid of Orkan technology to see what his friends’ lives would be like if he had never arrived on Earth.

Without being seen nor heard, Mork observes that Mindy would have a husband but she would be unhappily married to a compulsive gambler. Mindy would be gainfully employed, but all her money would be spent on her husband Cliff's gambling debts and she wouldn't be free to pursue her own passion for a career in journalism. Mork also observes that Mindy's father and her grandmother would also be unhappy as Mork has brought a great deal of support, encouragement, and joy into their lives.

Although this isn't a Christmas-themed episode, it is filled with the spirit that we love to feel at holiday time--a spirit of reflection, love, and appreciation for our family and friends. This episode also serves as a reminder that those sentiments are appropriate all year round as well.

Do you have a favorite sitcom adaptation of  It's a Wonderful Life? There are quite a few--and I'll be discussing several more before this July marathon is over. Please feel free to leave comments below.