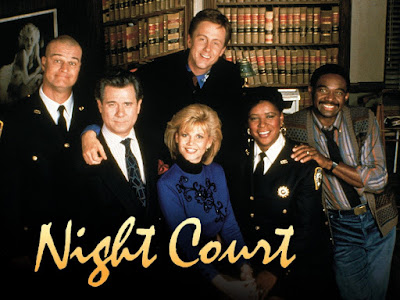 Merry Christmas in July! It is Day #27 of the month-long celebration of Christmas entertainment. Each day this month I will be sharing brief reminisces about Christmas TV episodes, specials, and movies with a IT'S A WONDERFUL SUMMER attitude. Yes--this month I'm sharing brief essays about TV adaptations of the 1946 movie "It's a Wonderful Life" along with TV programs with significant references to the movie. Just a little something different and a way for me to show off the diversity of holiday stories I've collected in the encyclopedia Tis the Season TV (the updated and expanded 2nd edition being released soon).

Today's discussion is on the season 8 episode "Hey Harry, F’Crying Out Loud--It’s a Wonderful Life...Sorta" from the sitcom Night Court which first aired on Feb. 27, 1991. Even though this is not a Christmas story, it is an adaptation of the 1946 holiday movie It's a Wonderful Life and includes some fantastic Christmas connects.

In this episode, Judge Harry Stone feels down after his girlfriend leaves him for the Witness Protection Program, and his regular routine seems meaningless. Attorney Christine Sullivan is worried about Harry and when she sees that Harry's favorite jazz singer Mel Tormé is performing in New York, she contacts Tormé and gets her friend tickets for the best seat in the house. Meanwhile, Harry is feeling depressed and wishes he’d never come to work at the courthouse. Harry's dream comes true courtesy of his guardian angel Herb who just so happens to resemble Mel Tormé.

Herb shows Harry what life in the courthouse would look like if he never came to work there. Harry and Herb step into a black-and-white world in which Dan Fielding is the night court judge and justice is for sale. Fielding's corruption makes optimistic defense lawyer Christine Sullivan feel cynical and jaded, easy-going court clerk Mac Robinson is now a stressed-out prosecutor, bailiff Bull Shannon is the Deputy Mayor manipulated by Fielding's machinations, and bailiff Roz Russell is sent to jail for standing up to Fielding. Harry sees that his influence on the court and his friends is important and he's glad to return to his life as the night court's judge.

The guardian angel Herb escorts Harry into a black-and-white world--literally--as the angel explains that he knows Harry is a fan of old Hollywood movies. Inside the court, everyone is dressed in 1940s suits, dresses and fedoras--not just reflecting vintage Hollywood but recreating the look of It's a Wonderful Life.

Although the story is not set at Christmas, casting Mel Tormé as Harry's guardian angel suggests Christmas nonetheless. Not only did Mel Tormé write the holiday anthem "The Christmas Song" (with Bob Wells), but Tormé had just appeared in the eighth season Christmas episode of Night Court two months prior! Another connection to It's a Wonderful Life is made in this episode when the song "Auld Lang Syne" can be heard just before the sitcom's closing credits. The song "Auld Lang Syne" is sung in It's a Wonderful Life at the end of the movie when all of George Bailey's friends arrive with money to help him out of his jam and the celebrating begins--the emotional highlight of the 1946 movie. This sitcom's tribute to It’s a Wonderful Life may not be a Christmas episode but the spirit remains the same.

Just a few more days of TV references to It's a Wonderful Life. Have I mentioned your favorite TV adaptation yet? Feel free to leave comments below. Merry Christmas in July!