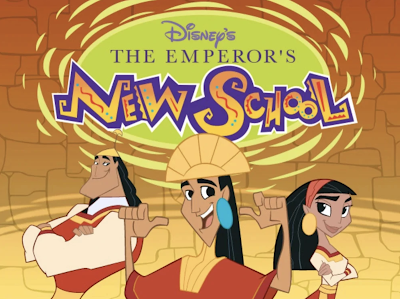 Merry Christmas in July! It is Day #26 of the month-long celebration of Christmas/holiday entertainment. Each day this month I will be sharing brief reminisces about Christmas TV episodes, specials, and movies with a IT'S A WONDERFUL SUMMER attitude. Yes--this month I'm sharing brief essays about TV adaptations of the 1946 movie "It's a Wonderful Life" along with TV programs with significant references to the movie. Just a little something different and a way for me to show off the diversity of holiday stories I've collected in the encyclopedia Tis the Season TV (the updated and expanded 2nd edition being released soon).

Today's discussion is on the Disney Channel animated series The Emperor's New School which is a follow-up to the animated Disney movie The Emperor's New Groove from 2000. The series centers on the character Kuzco who is focusing on his education before becoming emperor. The villain here is the adviser Yzma who wants to be empress instead. The first season episode "Yzmopolis" draws upon the 1946 holiday movie It's a Wonderful Life for its inspiration. I've chosen to discuss this episode because the series is set during the Pre-Columbian era featuring people from the Incan culture. I hope you're as impressed as I am to see how far the It's a Wonderful Life-story structure has traveled and yet remains meaningful to viewers. Let's look more carefully at the episode.

In the 2006 episode "Yzmopolis," Kuzco knows that in his role as emperor, he doesn’t fit in with everyone else. After he upsets his friends Chicha, Kronk and Malina, Kuzco goes to the Temple of the Sky God and wishes he were never emperor. When Kuzco discovers his wish has come true and he can now fit in with the others, he happy to live the life of a peasant.

But Kuzco finds being a peasant isn’t as he imagined when Yzma is the emperor, Kronk is the school principal, and Malina is in violation of Yzma’s law. Kuzco finally realizes he is ready to resume his life as an emperor, however Yzma holds his fate in her hands.

Even though this story is an adaptation of the 1946 holiday movie It’s a Wonderful Life, the 2006 episode is not a Christmas story. "What kind of Christmas could Incans celebrate anyway" you may ask. This is directly addressed in the 2007 episode “A Giftmas Story.” In that 2nd season episode, the holiday celebrated by Kuzco and his friends is creatively called Giftmas--a clear parallel to Christmas. The holiday features a gift-giver named Papa Santos who has a nice and naughty list from which he gathers names to give gifts. Papa Santas lives in the Ice Fortress (read: North Pole) and delivers his gifts on Giftmas Eve from a rickshaw to those who believe in him. Sounds pretty familiar, no?

Even though the 1st season episode "Yzmopolis" does not take place at Christmas or Giftmas, it is interesting to see how the story structure from the 1946 holiday movie is repeated in a meaningful way--in a story for young viewers. Merry Christmas in July!