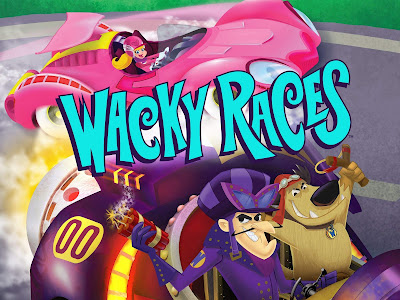 Merry Christmas in July! It is Day #22 of the month-long celebration of Christmas entertainment. Each day this month I will be sharing brief reminisces about Christmas TV episodes, specials, and movies with a IT'S A WONDERFUL SUMMER attitude. Yes--this month I'm sharing brief essays about TV adaptations of the 1946 movie "It's a Wonderful Life" along with TV programs with significant references to the movie. Just a little something different and a way for me to show off the diversity of holiday stories I've collected in the encyclopedia Tis the Season TV (the updated and expanded 2nd edition being released soon).

Today's discussion is on the 2017 episode "It's a Wacky Life" from the reboot of the 1960s Hanna-Barbera animated series. It made its debut and is currently streaming on Boomerang+. In this story, the villainous Dick Dastardly is too busy planning more schemes with his vehicle to attend the Wacky Racers' Christmas party.

When Dick eventually does see what’s going on at the party, he’s humiliated in a rap battle against Penelope Pitstop. Returning to his race car to work on more boobie traps, he finds that once again, the contraptions only harm him. His spirit is separated from his body and floats to heaven where he meets an angel (resembling I.Q.). The angel reviews with Dastardly how disastrous his scheming efforts have been in life. When Dastardly expresses that he wished he were never born, the angel shows him what his fellow racers’ lives would be like without him. Tiny is a TV talk show host, Muttley is President of the United States, and Peter Perfect has won even more racing awards. This convinces Dastardly that he has much to live for--in order to continue his schemes!

This holiday story is a loose adaptation of the 1946 movie It’s a Wonderful Life. It is also a parody of the original intent of the meaning in the Frank Capra original--here, Dastardly is only motivated to return to his original life because he has much more villainy to commit! While this episode is certainly not the first parody of It's a Wonderful Life, it is a reminder that the original story is so well known that humor is derived from turning the familiar story on its head.

So much more yet coming in the month-long tribute to It's a Wonderful Life. Merry Christmas in July!