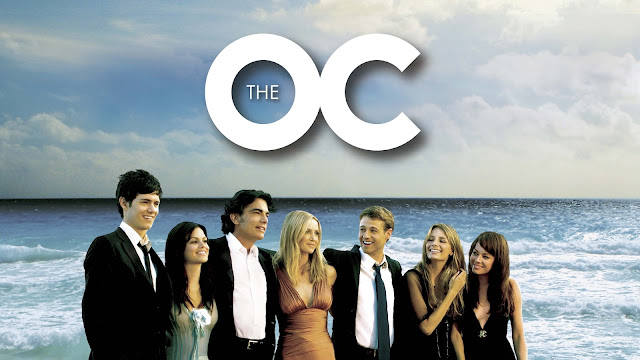 Merry Christmas in July! It is Day #15 of the month-long celebration of Christmas entertainment. As announced before, each day this month I will be sharing brief reminisces about Christmas TV episodes, specials, and movies with a IT'S A WONDERFUL SUMMER attitude. Yes--this month I'm sharing brief essays about TV adaptations of the 1946 movie "It's a Wonderful Life" along with TV programs with significant references to the movie. Just a little something different and a way for me to show off the diversity of holiday stories I've collected in the encyclopedia Tis the Season TV (the updated and expanded 2nd edition being released soon).

In this episode, Ryan and his girlfriend Taylor are arguing while hanging Chrismukkah lights on the roof when they both fall from the ladder and sustain head injuries serious enough to place both into comas. "Chrismukkah" is the Cohen family holiday started by Seth, a combination of Christmas and Hanukkah traditions--the result of being raised by a Jewish father and a Protestant mother. Chrismukkah, of course, is celebrated in the first three season of The O.C. in the episodes "The Best Chrismukkah Ever" in 2003, "The Chrismukkah That Almost Wasn’t" in 2004, and "The Chrismukkah Bar Mitz-vahkkah" in 2005.

Back to the season 4 episode. Family and friends surround Ryan and Taylor in the hospital while they go through a dream-like experience of a parallel world as if they were never born! In a loose, Southern California-style adaptation of the 1946 movie It’s A Wonderful Life, life looks different for the Cohen family, as Sandy is mayor and married to Julie. Julie is sleeping with Che, Summer was about to marry Che, and Kirsten is married to Jimmy. Marissa is still dead but she died much earlier.

Ryan and Taylor work to fix the problems of their friends and family made by their absence. Taylor confronts her own brutal mother and Ryan tries to save the broken relationships, hoping to right the wrongs. Ryan and Taylor also need to pull themselves out of this alternate Orange County universe where nobody knows or recognizes them. In his coma-fever dream, Ryan resolves his guilt for blaming himself for Marissa’s death and comes to appreciate that his efforts had actually extended her life.

This supernatural experience allows Ryan to let go of the past, say goodbye to Marissa, and move forward with his feelings for Taylor in the present. Recognize actor Autumn Reeser who plays Taylor? In more recent years, she's become a regular leading lady in Hallmark holiday movies in Love at the Thanksgiving Day Parade (2012), A Bramble House Christmas (2017), Christmas Under the Stars (2019) and A Glenbrooke Christmas (2020).

I'm endlessly entertained by the creative ways TV writers draw upon the classic story in It's a Wonderful Life to find ways to express something new. Feel free to add a comment below. We're about half through Christmas in July--lots more references to Frank Capra's 1946 movie coming up.