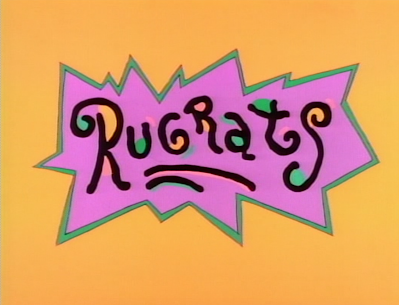 Merry Christmas in July! It is Day #8 in the month-long celebration of Christmas entertainment. As announced before, each day this month I will be sharing brief reminisces about Christmas TV episodes, specials, and movies with a IT'S A WONDERFUL SUMMER attitude. Yes--this month I'm sharing brief essays about TV adaptations of the 1946 movie "It's a Wonderful Life" along with TV programs with significant references to the movie. Just a little something different and a way for me to show off the diversity of holiday stories I've collected in the encyclopedia Tis the Season TV (the updated and expanded 2nd edition being released soon).

Today's discussion is the third season segment "Chuckie's Wonderful Life" from the animated series Rugrats. This episode made its debut on Feb. 13. 1994. Although it is not set at Christmas time, the story is an adaptation of the 1946 holiday movie It's a Wonderful Life.

In this story, Chuckie has been told not to play with his father’s favorite thing: a Latvian folk dance music CD. But the shiny object is too much to resist, and then Chuckie loses the CD. His father is hurt when his CD is missing and Chuckie blames his friends for his own mistake.

Chuckie runs away, regretting he’d ever been born, when his guardian angel finds him. Chuckie’s angel shows him the lives of his family and friends if he’d never been born: his father’s only companion would be a sock puppet, babies Phil and Lil would be lacking a moral compass, and Angelica would be an overweight tyrant dictating the lives of Tommy and the other members of the Pickles family.

In another clever parallel to the movie It's a Wonderful Life, it is eventually revealed that Chuckie didn't so much "lose" his father's CD as Angelica stole it--much like Mr. Potter stole Uncle Billy's money although George Bailey feels responsible for its loss. Although this episode is not a Christmas story, it does define Chuckie's character, and his role within his family and the world of his baby friends.