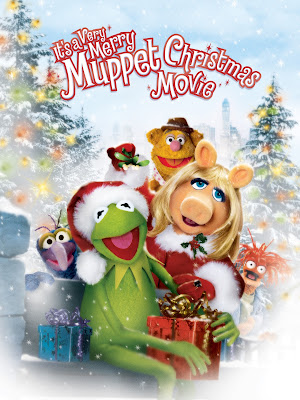 Merry Christmas in July! It is Day #9 of the month-long celebration of Christmas entertainment. As announced before, each day this month I will be sharing brief reminisces about Christmas TV episodes, specials, and movies with a IT'S A WONDERFUL SUMMER attitude. Yes--this month I'm sharing brief essays about TV adaptations of the 1946 movie "It's a Wonderful Life" along with TV programs with significant references to the movie. Just a little something different and a way for me to show off the diversity of holiday stories I've collected in the encyclopedia Tis the Season TV (the updated and expanded 2nd edition being released soon).

Today's discussion is on the feature-length story It's a Very Merry Muppet Christmas Movie which made its debut on Nov. 29th, 2002 on NBC. This holiday story features The Muppets--this time headed by Jim’s son Brian Henson. While the story is filled with pop culture references to other Christmas movies and specials including "A Christmas Carol,” “The Grinch,” “Rudolph,” and “Gift of the Magi,” these are mostly one-line jokes and brief references. Overall, this TV movie’s plot is an adaptation of another popular Christmas story It’s A Wonderful Life.

In this story, an angel named Daniel sees that Kermit the Frog is alone and sad at Christmas time and the angel worries about Kermit’s future. Daniel takes his case to his heavenly Boss and shows her Kermit’s story to explain why he’s so sad. In flashback, viewers see that Kermit is worried because the Muppet Theater is going to close. The Muppets had staged a successful Christmas show “Moulin Scrooge” but Fozzie Bear had mistakenly lost the proceeds before he could get the money to the bank to pay off the mortgage. Now the bank wants to close the theater. The angel Daniel is sent to fix things for Kermit on Earth but the frog utters those magic words “I wish I were never born,” forcing the angel to show him what life would be like if he weren’t around. In this alternate world, none of Kermit’s friends are following their dreams with careers in the theater. Kermit begs the angel to return him to the world in which he lives, but Daniel’s interference in the Muppets’ lives proves unnecessary.

This film’s original song “Everyone Matters,” composed by Desmond Child and Davitt Sigerson, was nominated for an Emmy for “Outstanding Original Song.” The Muppets also sing “We Wish You a Merry Christmas.”

The cast includes The Muppets, David Arquette as Daniel, Whoopi Goldberg as Daniel’s heavenly Boss, Joan Cusack as the bank employee Rachel Bitterman, Matthew Lillard as Luc Fromage, and William H. Macy as the angel Glenn. The voice cast for the Muppets include Steve Whitmire as Kermit the Frog/Rizzo the Rat/Beaker, Eric Jacobson as Fozzie Bear/Miss Piggy/Animal, and Dave Goelz as Gonzo/Dr. Bunsen Honeydew.

The Muppets theater production "Moulin Scrooge" is a parody of the 2001 movie musical Moulin Rouge! directed by Baz Luhrmann. This segment alone makes this Muppets TV movie a classic.

More adaptations of It's a Wonderful Life and TV programs featuring significant references to the movie are coming up on the website all month long. Merry Christmas in July.