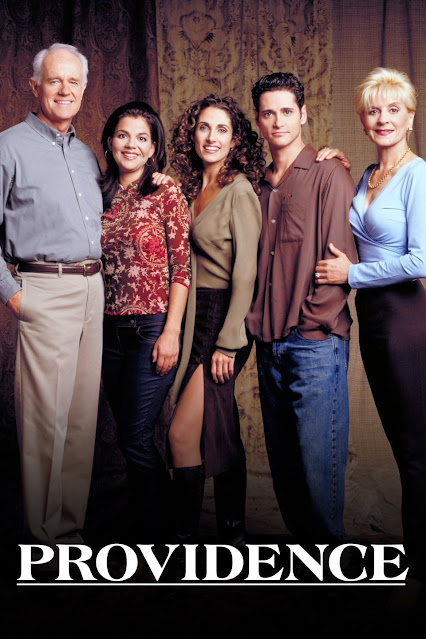 Merry Christmas in July! It is Day #18 of the month-long celebration of Christmas entertainment. As announced before, each day this month I will be sharing brief reminisces about Christmas TV episodes, specials, and movies with a IT'S A WONDERFUL SUMMER attitude. Yes--this month I'm sharing brief essays about TV adaptations of the 1946 movie "It's a Wonderful Life" along with TV programs with significant references to the movie. Just a little something different and a way for me to show off the diversity of holiday stories I've collected in the encyclopedia Tis the Season TV (the updated and expanded 2nd edition being released soon).

Today's discussion is on the 2nd season Christmas episode "Home for the Holidays" from the family drama Providence. In this episode's story Sydney wants to create a traditional holiday for the family just like the ones her mother used to organize, but no one seems willing to cooperate. Her sister Joanie is distracted trying to include her baby’s irresponsible father into her holiday plans, brother Robbie is busy making money selling the hottest toy of the holiday season, and their father Jim is going to a neighbor’s holiday party.

While watching the movie It's a Wonderful Life on TV,  Syd attempts to decorate the Christmas tree alone and she questions why she ever moved back home to Providence in the first place. After she falls and hits her head, Syd finds her wish come true, courtesy of her guardian angel mother. Sydney awakens to live out her own version of It’s a Wonderful Life seeing what the Hansens’ lives would have been like if she hadn’t helped them through the hard times.

Syd learns that if she hadn't come home to Providence, she would be married to her former boyfriend Jerry and still living an unsatisfying superficial life as a plastic surgeon in California. In Providence, the medical clinic wouldn't offer the quality affordable care that she has worked hard to bring to the neighborhood--instead it would be a managed care facility. Her father Jim would have retired early and sold the family home. Joanie wouldn't be running the Barkery (doggie treats bakery), and Robbie would be in jail for attempting to sell stolen toys at Christmas. Syd finally comes to see how she is needed by her family and the community in Providence.

This story opens with Syd dreaming of her mother Lynda “directing” a Hanson family traditional Christmas as if it was a film production.

Wouldn't it be great if this series was fully released on DVD or available on a streaming platform? Syd's ex-boyfriend Jerry is played by Patrick Fabian--who is currently starring as Howard in the series Better Call Saul. More adaptations of It's a Wonderful Life coming up. Please feel free to leave comments below.