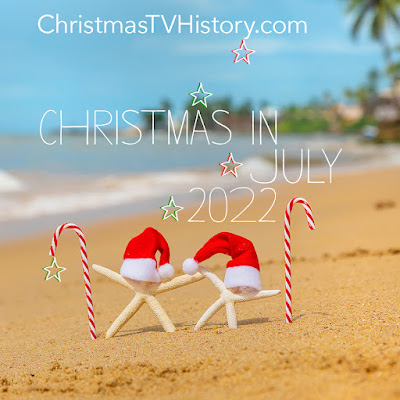 Merry Christmas in July! Today begins the month-long celebration of Christmas entertainment. As announced before, each day this month I will be sharing brief reminisces about Christmas TV episodes, specials, and movies with a IT'S A WONDERFUL SUMMER attitude. Yes--this month I'm sharing brief essays about TV adaptations of the 1946 movie "It's a Wonderful Life" along with TV programs with significant references to the movie. Just a little something different and a way for me to show off the diversity of holiday stories I've collected in the encyclopedia Tis the Season TV (the updated and expanded 2nd edition being released soon).

Let's kick off July with a discussion of the 1977 Christmas TV movie "It Happened One Christmas" which made its debut December 11, 1977 on ABC. This is a feature-length, made-for-TV adaptation of the classic 1946 film “It’s a Wonderful Life.” This version features several characters cast in different gendered roles. For example, the lead role here is Mary Bailey, instead of George Bailey. However, the spirit of the story remains the same. In this version, Mary Bailey spends her life setting aside her own goals and ambitions to help her family business and the residents of her small town better their lives. After a life spent making sacrifices for others, Mary comes to question if her choices were all worth it. Mary’s guardian angel Clara arrives and shows Mary what life would be like for the people in Bedford Falls if she had not been there to help them and continually challenge the wealthy Mr. Potter’s influence.

TV critics panned this movie and it quietly disappeared from television. This remake seems to be missing some of the charm and chemistry of the original movie, however any adaptation will feel challenged to match the magic of Frank Capra’s hand.

Marlo Thomas didn’t just star in this film--she also co-produced it. Switching the traditional gendered roles of three major characters seems in keeping with her feminism and 1970s TV movies in general. The production was nominated for two Emmys--one for Outstanding Art Direction, and Cloris Leachman earned another for Outstanding Supporting Actress.

Don't forget--I'll be posting each day throughout the month of July about programs inspired by "It's a Wonderful Life." Enjoy your summer!