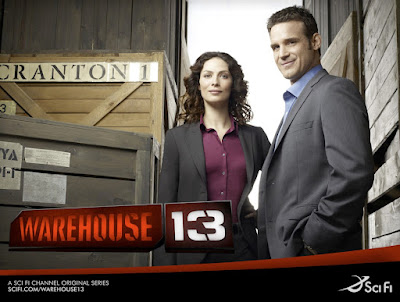 Merry Christmas in July! It is Day #6 in the month-long celebration of Christmas entertainment. As announced before, each day this month I will be sharing brief reminisces about Christmas TV episodes, specials, and movies with a IT'S A WONDERFUL SUMMER attitude. Yes--this month I'm sharing brief essays about TV adaptations of the 1946 movie "It's a Wonderful Life" along with TV programs with significant references to the movie. Just a little something different and a way for me to show off the diversity of holiday stories I've collected in the encyclopedia Tis the Season TV (the updated and expanded 2nd edition being released soon).

Today's discussion is on the third season episode "The Greatest Gift" of the science fiction series Warehouse 13. Warehouse 13 is a series that originally aired on the Syfy Channel that combines charming characters with a provocative location--these are the employees of an Area 51-type governmental storage facility. They are responsible for guarding over supernatural and sometimes alien artifacts that the government secretly possesses. I first wrote about this episode here on the website in 2012 and I've pulled from that essay to talk about it again here.

In this third season episode, special agent Pete Lattimore is in the warehouse's Aisle of Noel when he accidentally touches an upholstery brush owned by Philip Van Doren Stern--the author of the short story “The Greatest Gift” which inspired the movie It’s A Wonderful Life. Pete now finds he lives in world in which he has never been born! The special agent goes to Washington DC to convince his co-worker Myka, who’s never heard of him, to let another special agent Artie out of prison and help him break into Warehouse 13. They have to make things right because in this world, a dangerous villain from previous episodes--agent-turned-killer James MacPherson isn’t dead. MacPherson has booby trapped the warehouse to use the artifacts for his own purposes. Pete has to find a way to convince his co-workers Myka, Artie, Claudia, and Leena to trust him even though he’s a stranger.

This is a very clever, complex adaptation of the holiday movie It’s A Wonderful Life in a new and interesting way. It maintains the world and characters of the Warehouse 13 science-fiction universe but also places them in familiar narrative of It's a Wonderful Life. Literary fans love this too because this Christmas episode's story goes one step further and acknowledges and incorporates Philip Van Doren Stern's original story "The Greatest Gift" which inspired Frank Capra to make the 1946 holiday movie.

The cast of this 2011 Christmas episode includes Eddie McClintock as Pete, Joanne Kelly as Myka, Saul Rubinek as Artie, Allison Scagliotti as Claudia, Genelle Williams as Leena, and Roger Rees as James McPherson.

Have you ever read Philip Van Doren Stern's book "The Greatest Gift?"  Please feel free to leave comments below. Merry Christmas in July!