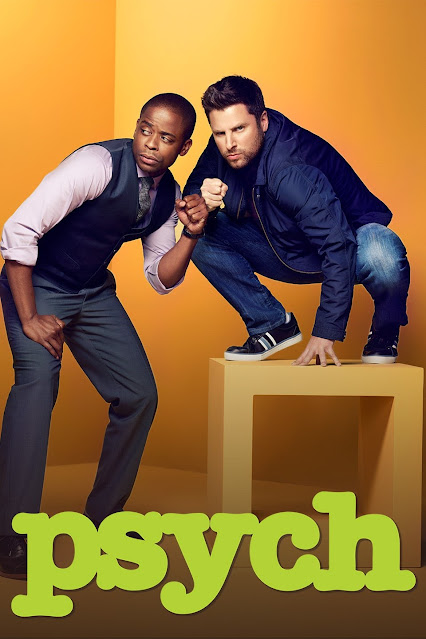 Merry Christmas in July! It is Day #28 of the month-long celebration of Christmas entertainment. Each day this month I will be sharing reminisces about Christmas TV episodes, specials, and movies with a IT'S A WONDERFUL SUMMER attitude. Yes--this month I'm sharing brief essays about TV adaptations of the 1946 movie "It's a Wonderful Life" along with TV programs with significant references to the movie. Just a little something different and a way for me to show off the diversity of holiday stories I've collected in the encyclopedia Tis the Season TV (the updated and expanded 2nd edition being released soon).

Psych isn't airing on Ion TV on Saturdays anymore (as of July 2022) but this trailer does capture the tone of the detective series.

Today's discussion is on the humorous detective series Psych and its fifth season episode "The Polarizing Express." In this Christmas episode, police consultant Shawn Spencer is caught on camera illegally obtaining evidence against the organized criminal Czarsky, so the case is dismissed, and the Santa Barbara Police Department fires Shawn. Feeling worthless, Shawn takes a nap after wondering how life would be different if he had never become the psychic police consultant five years ago.

Shawn slips into a dream, guided by actor Tony Cox. Shawn's dream resembles It’s A Wonderful Life--but with even more movie and TV references! Shawn experiences what life would be like for the people who know him if he had never been there to influence them. Realizing that some of them may be better off, Shawn decides to awaken and gather more evidence to put Czarsky behind bars. In the end, the police are able to gather evidence against Czarsky when the city’s residents come together and agree to testify against him. Much like the ending in the 1946 movie, Shawn feels his life has meaning when he witnesses the community spirit to support him.

James Roday starred in this episode, directed it, and even has a co-writing credit. Whew! I like this adaptation of It's a Wonderful Life because the writing is clever enough to play with the familiar story structure and parody it too. This comedy series grew to be a cult TV hit largely for its humor, irreverence, pop culture and self-referential style, and boldness. This Christmas episode embodies the series' charm to the fullest. Psych has several Christmas episodes besides this one--do you have a favorite?