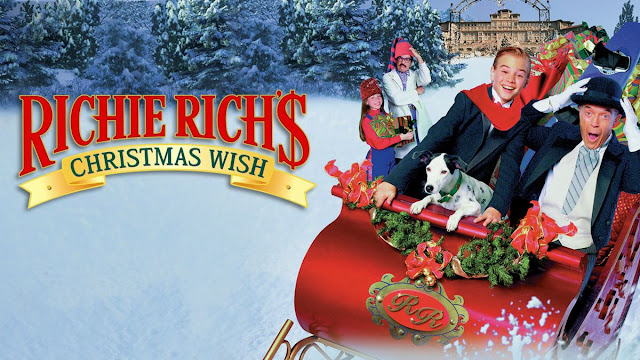 Merry Christmas in July! It is Day #21 of the month-long celebration of Christmas entertainment. Each day this month I will be sharing brief reminisces about Christmas TV episodes, specials, and movies with a IT'S A WONDERFUL SUMMER attitude. Yes--this month I'm sharing brief essays about TV adaptations of the 1946 movie "It's a Wonderful Life" along with TV programs with significant references to the movie. Just a little something different and a way for me to show off the diversity of holiday stories I've collected in the encyclopedia Tis the Season TV (the updated and expanded 2nd edition being released soon).

This is a feature-length children’s movie that was released directly to video in 1998, and eventually made its TV debut on Fox Family channel in 1999.  The story centers around the immensely wealthy character Richie Rich who was first introduced in Harvey comic books in the 1950s. This holiday story is a follow-up to the 1994 movie Richie Rich starring Macaulay Culkin. Here, the character is played by David Gallagher--who was then also appearing in the TV family drama series 7th Heaven.

In this live action holiday story, Richie’s attempts to deliver Christmas gifts to the orphanage by a remote controlled sleigh are sabotaged by his nasty rival Reggie Van Dough. Frustrated, Rich asks Professor Keenbean’s latest invention, the Wish Machine, what life would be like if he were never born. What follows is a plot taken straight from the movie It’s A Wonderful Life--Richie wakes up to discover that no one in Richville recognizes him any longer and Reggie is now the Rich’s son.

As Richie wanders this new world that exists without him, he learns that Reggie has closed the local factory, charity hospital, and orphanage while threatening to cancel Christmas! Richie decides to help make things right, however Reggie orders the police to throw Richie in jail. It becomes a race against time for Richie to convince his former butler Cadbury and his former friends to help him get Professor Keenbean to re-invent his Wish Machine so Richie can return the world to its proper order before Christmas is canceled altogether.

This movie’s story also references O.Henry’s popular short story “The Gift of the Magi.” Mr. and Mrs. Rich exchange gifts for which they have sacrificed their precious yacht and golf course in order to buy a solid gold anchor and a high-end golf cart for each other.

The metal band members of Root Canal include Broadway’s Rex Smith as Rudy and Fleetwood Mac’s Billy Burnette as Nigel.