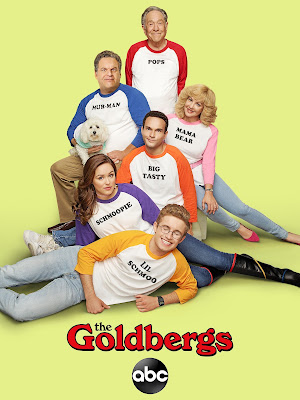 Merry Christmas in July! It is Day #12 of the month-long celebration of Christmas entertainment. As announced before, each day this month I will be sharing brief reminisces about Christmas TV episodes, specials, and movies with a IT'S A WONDERFUL SUMMER attitude. Yes--this month I'm sharing brief essays about TV adaptations of the 1946 movie "It's a Wonderful Life" along with TV programs with significant references to the movie. Just a little something different and a way for me to show off the diversity of holiday stories I've collected in the encyclopedia Tis the Season TV (the updated and expanded 2nd edition being released soon).

Today's discussion is on the 7th season episode "It's a Wonderful Life" from the hit sitcom The Goldbergs. In this episode, matriarch Beverly Goldberg begins organizing the family’s professionally-shot holiday photo after lighting the Hanukkah candles. Erica Goldberg is determined to talk her boyfriend Geoff out of his eagerness to be included in the family photo. At his apartment, Barry’s roommates let him know that he’s a horrible friend. When he ignores their pleas to change, they decide to gaslight Barry into thinking he doesn’t exist and was never born--just like the plot of the 1946 movie It’s a Wonderful Life.

The prank fails to have an effect on him and Barry wants revenge in order to punish his roommates. Later, Barry falls asleep in front of the TV while watching It’s a Wonderful Life, and dreams about his roommates’ lives without him.

This complex story is an excellent example to view the legacy and influence of It's a Wonderful Life. This story is written in such a way to take advantage of viewers' cultural knowledge of the story in the 1946 movie. The Goldbergs' story creates two brief references to It's a Wonderful Life--once as a prank on Barry by his friends trying to manipulate him, and the second time as a dream sequence by Barry narrated by his guardian angel Pops (George Segal). Both of these It's a Wonderful Life references take place within a family celebrating Hanukkah. The story's appeal to IAWL is a means to challenge Barry's moral character--the same quest of George Bailey in the 1946 movie. As complex as this episode is, it makes perfect sense to viewers and continues the pop culture- saturated style of the sitcom as a whole. This episode also includes a significant reference to the 1983 movie A Christmas Story by including an actor who played a major character--Schwartz. Breath-taking, isn't it?