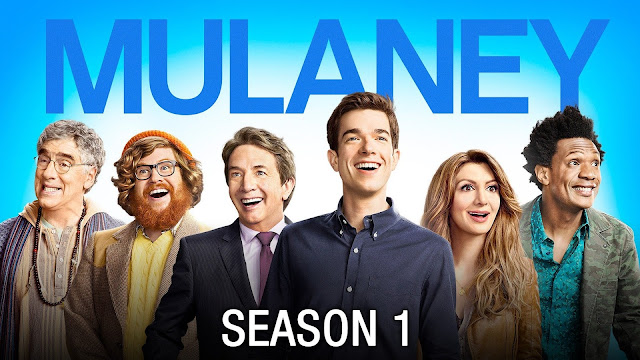 Merry Christmas in July! It is Day #7 in the month-long celebration of Christmas entertainment. As announced before, each day this month I will be sharing brief reminisces about Christmas TV episodes, specials, and movies with a IT'S A WONDERFUL SUMMER attitude. Yes--this month I'm sharing brief essays about TV adaptations of the 1946 movie "It's a Wonderful Life" along with TV programs with significant references to the movie. Just a little something different and a way for me to show off the diversity of holiday stories I've collected in the encyclopedia Tis the Season TV (the updated and expanded 2nd edition being released soon).

Today's discussion is on the complicated but highly entertaining episode "It's a Wonderful Home Alone" from the short-lived sitcom Mulaney--also known as The John Mulaney Show. In this first season episode, Mulaney is asked to produce Lou Cannon’s Christmas TV special with guest star Macaulay Culkin. John confesses that he can’t produce the show since he’s spent his entire life angry and envious about losing out on his audition in 1990 to Culkin to star in the movie Home Alone. Making matters worse, TV star Jesse Tyler Muños is also hosting a Christmas TV special and he’s trying to steal ideas from Cannon’s production.

Mulaney’s friends Jane and Motif try to help John by gaslighting him into experiencing what his life would be like if he had starred in Home Alone. Yes--Jane and Motif are inspired by the movie It’s a Wonderful Life to help their friend re-think his life’s worth. But John has a change of heart after being given a VHS copy of his original audition for Home Alone showing him how he never stood a chance getting the role he feels he missed out on. Returning to the set to help Lou with his Christmas TV special, John finds that Culkin didn’t even show up. So John is asked to be Culkin’s stand-in, a role he can’t pass up.

Jesse Tyler Muños booby traps the sound stage to try to stop John from producing Cannon’s special. John ends up trapped in cellophane, covered in feathers, and hit in the head by a swinging paint can, just like the Wet Bandits in the original Home Alone.

Apparently, the bones of this episode are based on a true story.