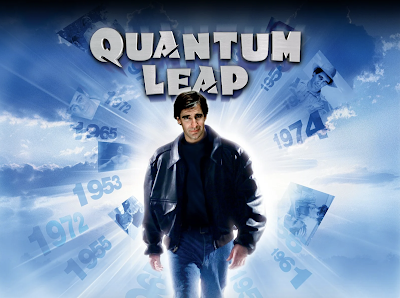 Merry Christmas in July! It is Day #16 of the month-long celebration of Christmas entertainment. As announced before, each day this month I will be sharing brief reminisces about Christmas TV episodes, specials, and movies with a IT'S A WONDERFUL SUMMER attitude. Yes--this month I'm sharing brief essays about TV adaptations of the 1946 movie "It's a Wonderful Life" along with TV programs with significant references to the movie. Just a little something different and a way for me to show off the diversity of holiday stories I've collected in the encyclopedia Tis the Season TV (the updated and expanded 2nd edition being released soon).

Today's discussion is on the 4th season episode "It's a Wonderful Leap" from the hit sci-fi/fantasy series Quantum Leap starring Scott Bakula and Dean Stockwell. This episode's story is not set at Christmas and it's not a Christmas story either. Instead, it's about a guardian angel. This may be the TV program most loosely associated with It's a Wonderful Life in the Christmas in July marathon, however this episode's story clearly draws upon the 1946 holiday movie for inspiration. Let's take a closer look.

In this episode, Sam leaps back to May 10th, 1958, where he finds himself in the body of Max Greenman, a taxi cab driver trying to earn a precious taxi medallion to run his own cab company. Driving his cab, Sam/Max meets a woman named Angela when he accidentally runs her over! When Sam pulls her out from under the cab, she is completely unharmed and explains that she is a guardian angel. Sam is hesitant to believe that Angela is an actual guardian angel but when she reveals she can see and talk with Al too--Sam comes to believe that they are both on the same mission. Sam and Angela are both looking to protect the cab driver Max from an armed robber who may take his life.

Angela the guardian angel is played by the great character actor Liz Torres. Here, Angela is a Puerto Rican New Yorker from the 1920s who used to be a professional singer. She's charming and knowledgeable, making it difficult for Sam to doubt her when she says she's a guardian angel. Adding another layer of meaning to her character, Angela sings the Gershwin tune "Someone to Watch Over Me" while keeping Sam/Max and his father Lenny company.

A reboot of Quantum Leap is going to start airing on NBC in the fall of 2022--will you be watching? Merry Christmas in July!