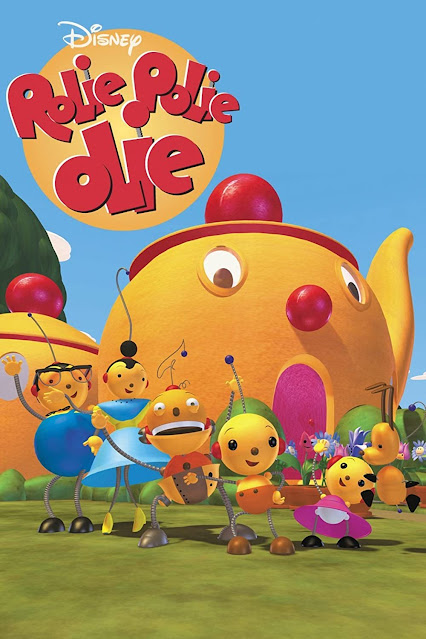 Merry Christmas in July! It is Day #30 of the month-long celebration of Christmas entertainment. Each day this month I will be sharing reminisces about Christmas TV episodes, specials, and movies with a IT'S A WONDERFUL SUMMER attitude. Yes--this month I'm sharing brief essays about TV adaptations of the 1946 movie It's a Wonderful Life along with TV programs with significant references to the movie. Just a little something different and a way for me to show off the diversity of holiday stories I've collected in the encyclopedia Tis the Season TV (the updated and expanded 2nd edition being released soon).

Today's discussion is on the 2001 episode "it's a Round-iful Life" of the CGI-animated Disney series Rolie Polie Olie. This imaginative children's series focuses on the Polie family of robots who live in a geometric world called Planet Polie. They don't exactly celebrate Christmas like us Earthlings, but instead they celebrate a nearly identical holiday--yet geometric one--called Jingle Jangle Days with an annual gift-giver named Klanky Klaus. This series is adorable!

Here's a clip so you can see what Klanky Klaus looks like--from the episode "A Jingle Jangle Wish" (2001).

The episode "It's a Round-iful Life" is adapted from the 1946 movie It’s a Wonderful Life, however it is not set at Christmas or Jingle Jangle Days. In this story, the young boy Olie is feeling like his parents only want to pay attention to his baby sister Zowie and that he isn’t wanted anymore. Olie decides to runaway but he only hides in the backyard treehouse. When his father Mr. Polie and mother Mrs. Polie miss Olie and realize what’s going on, they decide to help him feel better about himself. Olie’s parents and sister leave Olie alone in the treehouse but they speak loudly about how they miss him and how much their lives are lessened by his absence. Sure enough, Olie hears them and feels like one of the family again.

This charming adaptation of It’s a Wonderful Life is appropriate for the youngest of viewers to understand how to value one’s life. It's interesting that the children's series freely draws upon the familiar story structure of the 1946 movie to tell its story. I like that Olie's parents are familiar enough with the movie to use it to help their son.